Xmas Visit From The Grandparents

It's that time of year again! We were blessed just 3 short days ago with the greatest Christmas present we could ever ask for, the birth of our 3rd child. You can read about our RV Homebirth HERE. Today, Nonnie and Papoo (Nic's Parents) have asked to come up to the snowy Rocky Mountains to visit with us. They called this morning, and said they would be here around Noon.

However, my Aunt had swooped Monster High Girl away this morning to go shopping with her. And reception up here in these mountains is spotty at best. I started calling her in hopes that I could get ahold of them and ask her to bring MHG back home. I was beginning to worry that they might not get the opportunity to see MHG. I kept calling.

Nonnie and Papoo arrived around Noon, and I still hadn't reached my Aunt. Not that Cinderella was complaining. She was more than happy to have Papoo all to herself to play Dinosaurs. Eventually, I got ahold of her and they headed back here after they finished buying the last couple of items on their list. The 2nd MHG got home, she gave her Grandparents HUGE hugs and immediately got her Monster High dolls out to play with Papoo and Cindy's Dinosaurs. He always brings his own toys, too, so they were off to the bedroom...never to be seen again. Just kidding. They came back out once they realized there were Christmas presents for them to open. Hahaha!

After I was done nursing Cedar, I passed him off to Nonnie to cuddle with. It was pretty much the 1st time I haven't held him in 3 days. It felt nice to stand up and walk around my home for a bit with my hands free!

Both Grandparents were in their glory. One playing loudly away in the other room with the big kids, and the other, soaking in all the yummy Newborn snuggles and smells. 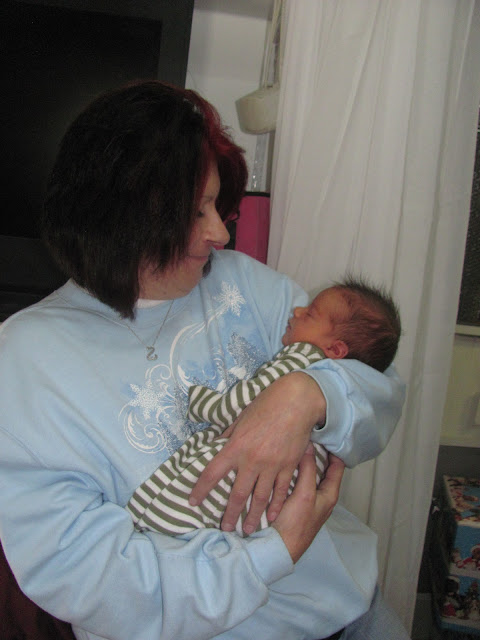 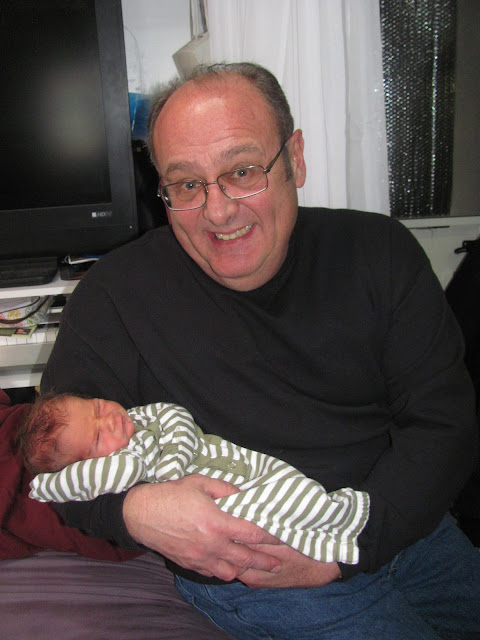 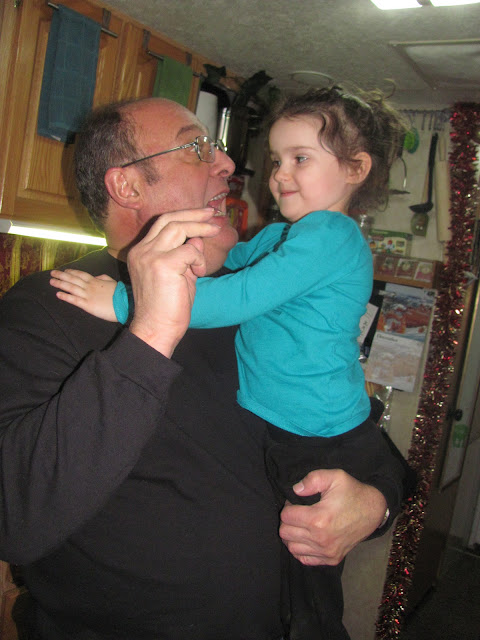 After a couple of hours into playing, the girls asked if they could open their presents. I finished up nursing Cedar (again), passed him back off to Nonnie to free up my hands for photo taking, and they immediately set to work, tearing the paper on their presents to shreds. 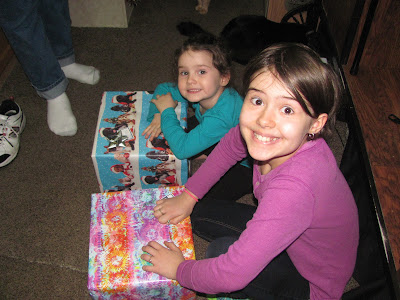 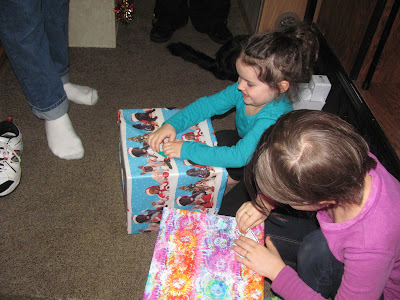 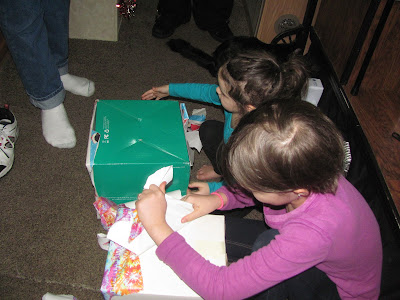 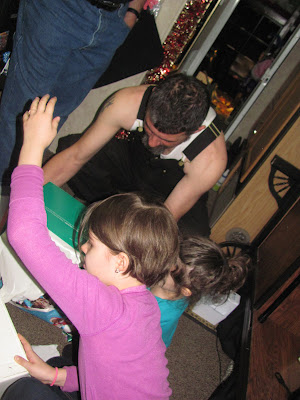 Cinderella was so excited to see the Young Living Essential Oils Dino Land Ultrasonic Diffuser (what a mouthful to say!) that she has been wanting ever since they released it a few short months ago. The Essential Oil mist shoots out the top of the Volcano, the base is a nightlight that stays on, even after the oils are done diffusing, and there are numerous light settings that the volcano can either cycle through or stay on one consistent color (at the top). She couldn't wait to see it in action! (I threw some Peace & Calming Essential Oil blend in to calm the atmosphere a bit.) 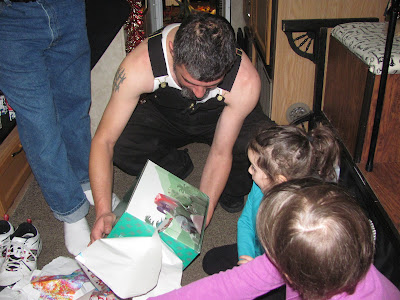 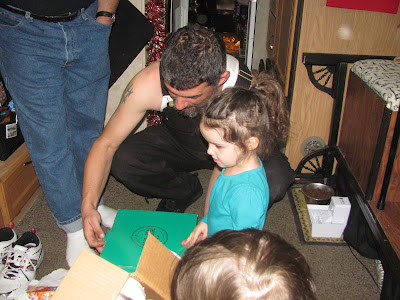 Monster High Girl is obsessed with Owls. One of her favorite Monster High dolls has one for a pet, Harry Potter has Hedwig, and I've collected them for as long as I can remember, and she loves to be like Mommy. So naturally, she is quite in love with them. Nonnie found her this gorgeous throw blanket for her bed. She was so grateful to receive it... especially because that's her favorite Owl, apparently! 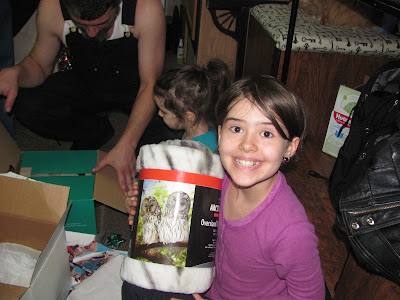 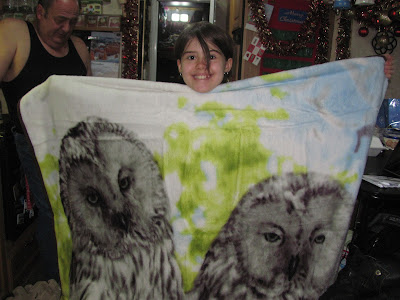 She also received a blank journal to write in. I don't know if I've ever told you guys this, but she is ALWAYS writing (or reading). She is actually about 50 pages or so into penning her own fictional tale. It is quite the fantasy story and when she's done, she wants me to get it published. (So if any of you know how to go about doing so, please email me some details!) 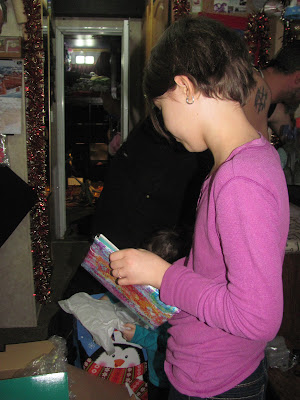 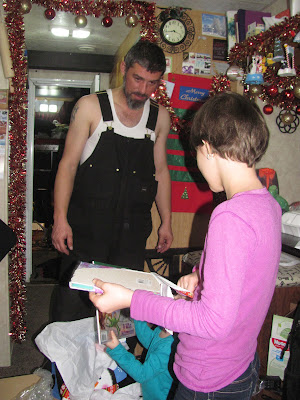 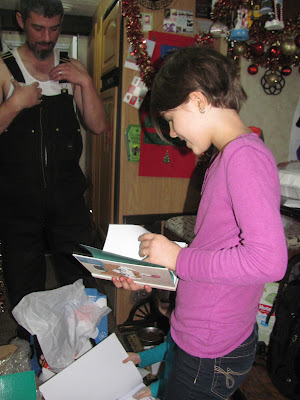 Cindy got a giant coloring and sticker book from the movie "The Good Dinosaur". She still hasn't seen that, but I'm sure we'll be purchasing it the second it comes out in stores. She doesn't look too thrilled in the pic, but I assure you, it took her no longer than a couple days to color every single dinosaur in that book...oh, and there were Dinosaur stickers on EVERYTHING throughout my home! Thanks a LOT guys, haha! 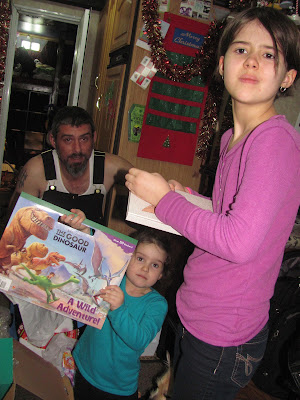 MHG also received a gift card to Amazon to buy media for the Kindle we were getting her for Christmas. She didn't know she was getting it yet, so she thought the gift card was just for buying whatever she wanted on there. Either way, she was SUPER stoked for the impending online shopping spree...who wouldn't be?!

We joined a program on Amazon that allows the girls to have access to thousands of kid-oriented books, games, videos, and apps on their Kindles (yes, we got them each one...the deal was too good to pass up) so the gift card ended up not being necessary to download the media she wanted. She was able, to instead, purchase a Harry Potter Marauder's Map, Hermione's Time Turner necklace, a fake-leather old-world style Journal, and her very first REAL writing Quill, complete with interchangeable nibs, ink well and ink, a wax seal Stamper and a few different waxes to choose from. She was in Harry Potter HEAVEN!!! And now Cinderella wants a Quill and Journal, too. I guess I know what to get her for her Birthday this year... 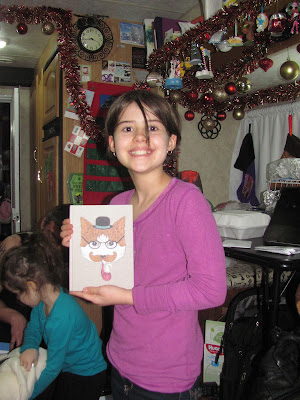 Cindy got a blanket, too. It's one of those ultra-soft throw blankets. She made Daddy rip the awesome comforter off her bed that I made her, and then had him put her new blanket on there. At first, I had my feelings hurt a bit (I busted my butt to make that comforter & duvet cover from scratch), but that night happened to be one of the coldest night's up here yet. Our window was a drafty wreck! Even despite the insulation in it and 3 curtains (1 of which was a thermal curtain) we had hanging in front of it.

With a newborn baby, I was frantic to get the window covered. I didn't want my new baby feeling any cold on his head just yet. So I went and grabbed the comforter I made Cinderella, and it perfectly covered not only the window, but the entire wall at the head of our bed. We have been toasty warm, and draft-free ever since. Everything worked out in the end, and I cheered up... super thankful for their gift to her! 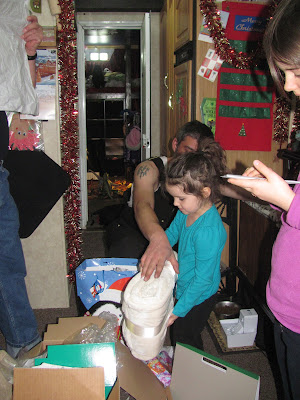 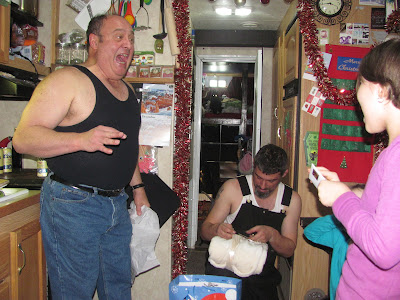 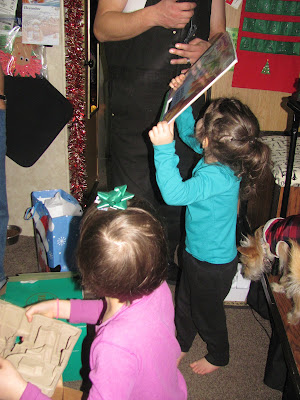 After the girls were done opening all their gifts, Nonnie and Papoo played and cuddled with the kids a bit longer and left before Sunset. No one is a fan of driving through the mountain pass up here in the dark. I can't imagine why??? Hahaha! The girls had a wonderful day with their Grandparents and we were so happy to see them as well. We have to soak in these moments while we can. When we were on the road, visits from ANY Grandparents were very few and far between, so we were incredibly grateful to them for coming up here to visit with us today. 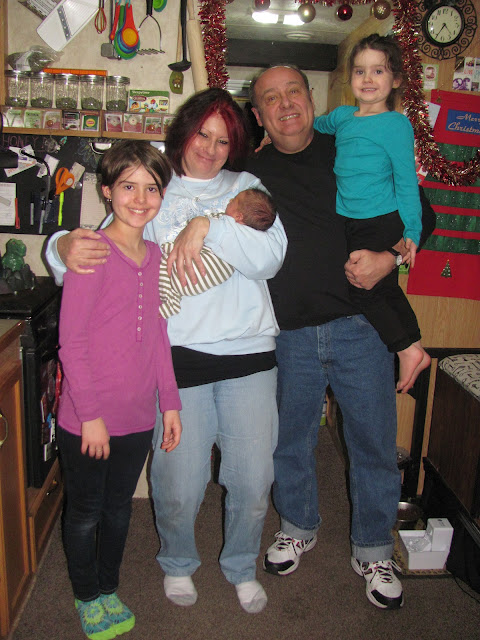