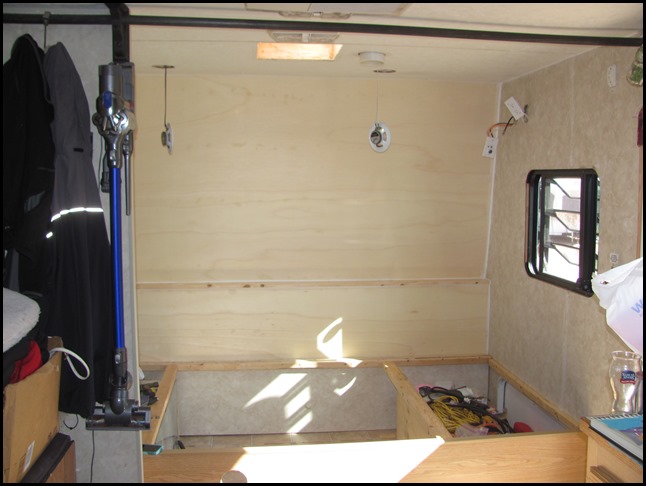 Last night, Nic made me sleep by the wall. I haven’t been able to sleep by that wall in a long time. I would get cold too easily…yes, even in the Summer. Mountain Summers can dip into the 40’s at night. After he told me I would be sleeping by the wall, this was his reasoning: “I’ll know how good of a job I did, if you aren’t shivering and clinging to me for warmth all night.” In the morning, when he got up for work, I heard him laughing. I cracked an eye open and asked him what was so funny? Apparently, this was the first time in the history of living in this RV, that he woke up with all my covers thrown off of myself and onto him. He chuckled to himself saying, “I guess I did a good job”. Yes! Yes he absolutely did!

While he was at work all day, I filled the smaller cracks and holes with spackling. I took the speakers, vent, ceiling window frame and fire detector all out of the ceiling, as I wanted to prepare for it hopefully being primed later that evening. I also removed the cabinets on the floor that used to follow alongside our bed. When he got home from work, he immediately began the prep to sand the walls. He ended up having enough time leftover to get the coat of primer on the walls and ceiling as well. Even with the stellar job he did of putting up plastic, the house was still filled with the toxic fumes of Primer. I can only imagine how bad he had it…being trapped in that tiny room with only 2 tiny windows to vent it out. We were choking on the fumes all the way back in the girls’ room…with their windows open.

The walls and ceiling were washed, then sanded with a 100-grit sandpaper. He made two passes over the walls and ceiling with the electric hand sander, tack toweling in between sandings. The Primer he used is said to be the ideal primer for that Luan board that RV’s have as walls (often confused with wallpaper). Killz OIL-based primer (not water-based) is said to adhere the best and I’ll tell you what, that was the exact same procedure I followed 2 years prior when I painted the back bedroom, and we’ve yet to have any problems with paint peeling off anywhere. I followed up with Behr Premium WATER-based (not oil-based) Zero-VOC paint 2 years ago, and that is the exact same paint and procedure we will use this time, too. Why fix it if it ain’t broke? 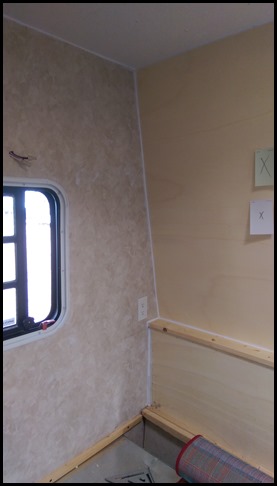 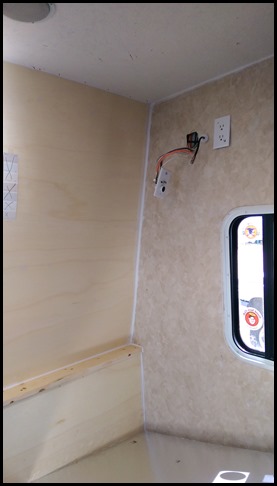 He has plans to rebuild all of this underbed storage as well. So you might as well get the “Before” pic of it now. 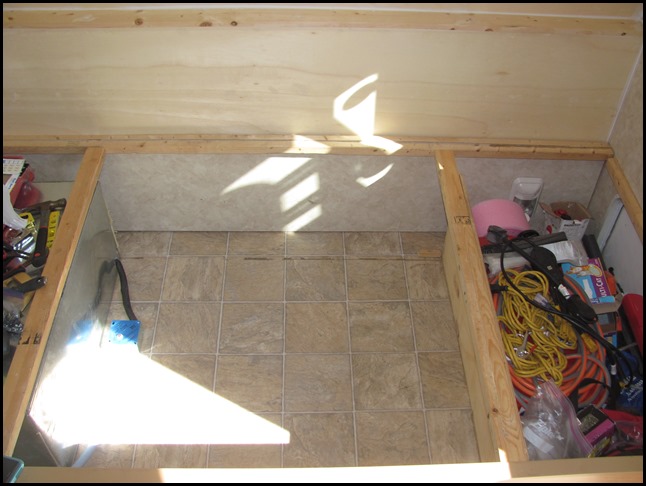 The ledge he built in all its glory. I already have plans to line my crystals and miniature statues up along its length. 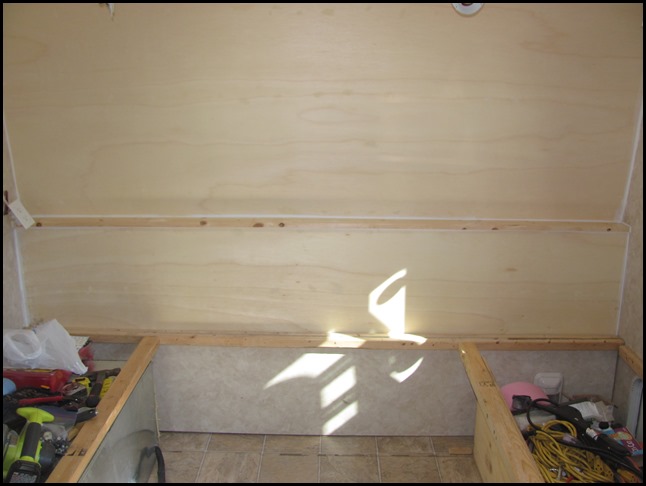 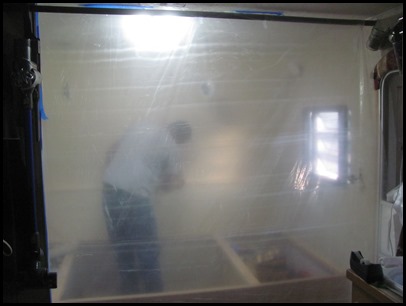 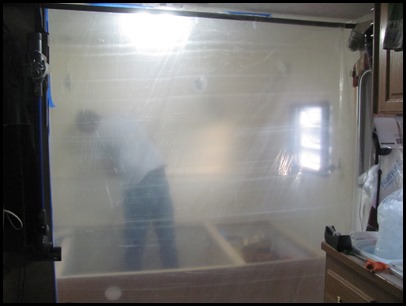 Nice and smooth and ready for the Primer. 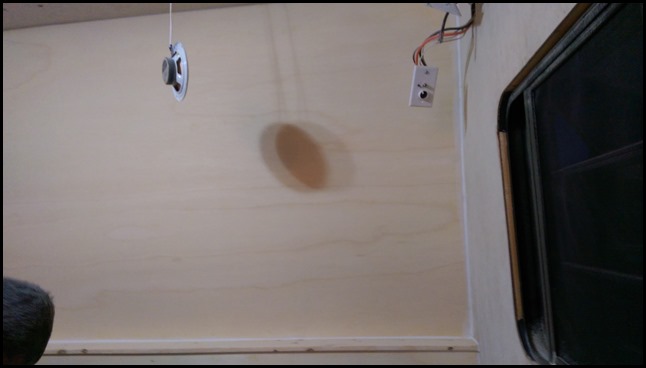 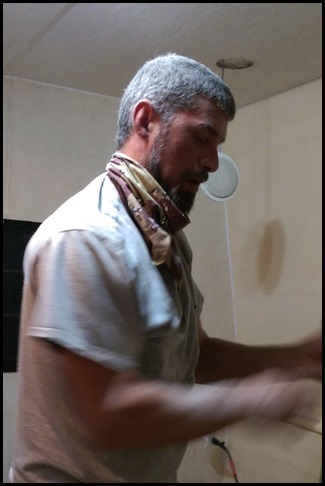 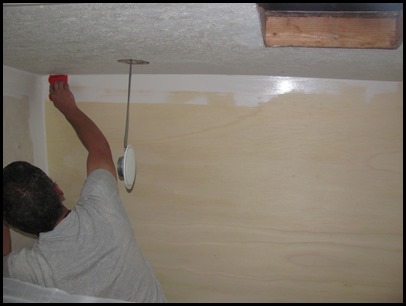 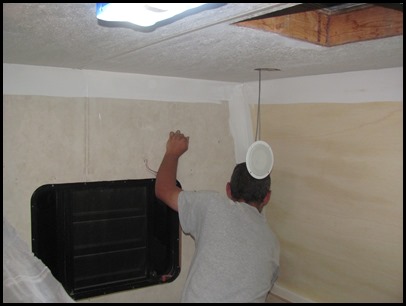 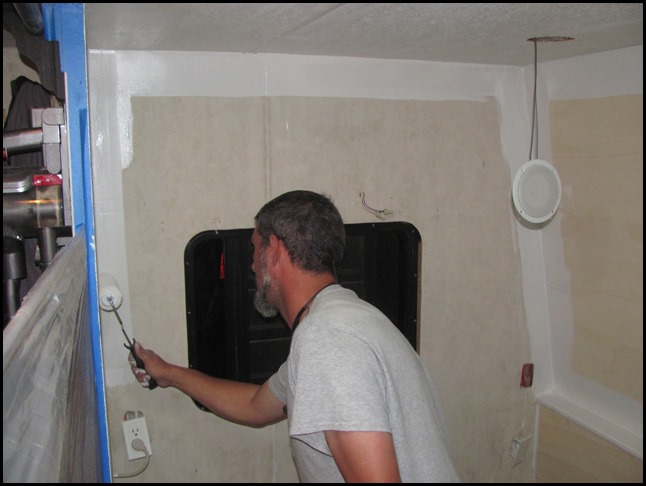 Edging and corners being primed on ceiling…then painting it. 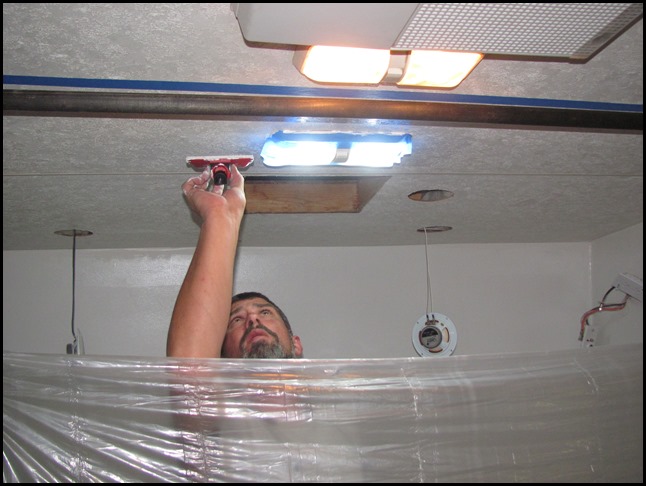 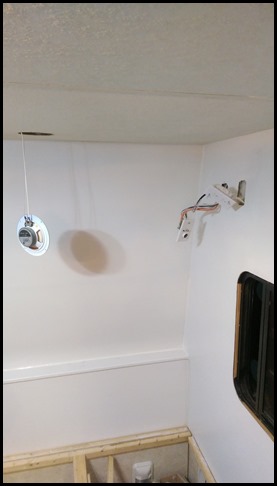 This is only Primer…but I’m already loving the all white!!! I can’t wait for him to get the REAL paint on! 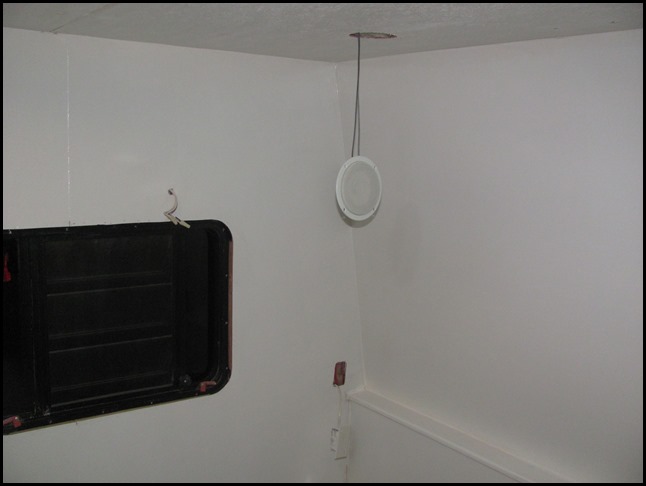 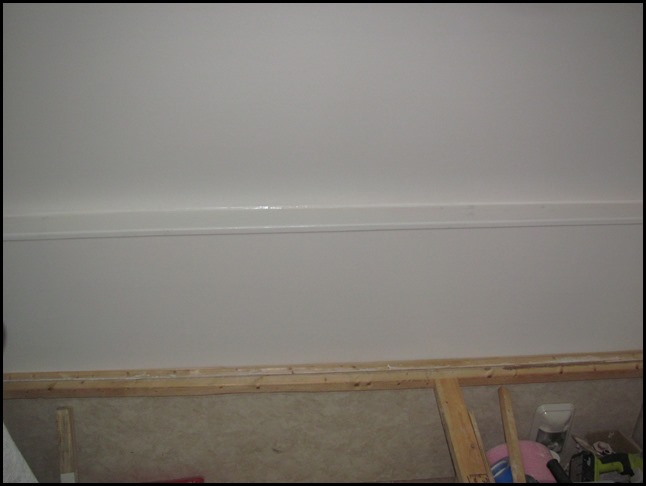 In the meantime, I must be patient and wait for this toxic primer to dry. He sealed that room off as best he could and luckily by the next day, the fumes were gone. Note: I removed the cabinets from under/beside our bed. Those had to go for the new bed remodel…which you will have to just wait to see. Thanks for reading! 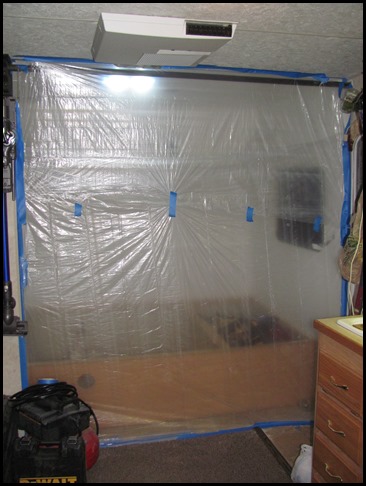 Part 1-Why are we remodeling?

Part 7-Final Coat & Cabinet Is Up