We are flying out today from Denver to Dallas! We are headed down South to visit my brother and hopefully bring him home from the hospital. He is about to turn 28 years old and he has lived with Prune Belly Syndrome since he was diagnosed with it in utero (before birth). It’s been a pretty tough life for him, and the past few months have been far more difficult than usual. He has to start dialysis in a couple days, as his only surviving kidney is failing. Currently, he is even too sick to be a candidate for a kidney transplant. We are fairly certain there is a family member that is a match though, so we are hoping my brother can improve enough to receive that kidney in the near future. That’s the hope at least.

Anyways, my alarm went off at 4am, and by 5am, my girls and I were on the road…Denver International Airport bound. They were so excited! I, however, was not. I HATE flying, and it’s been 15 years since I’ve had to do so. Unfortunately, I had to suck it up for their sakes and I think I did a pretty decent job of feigning excitement. 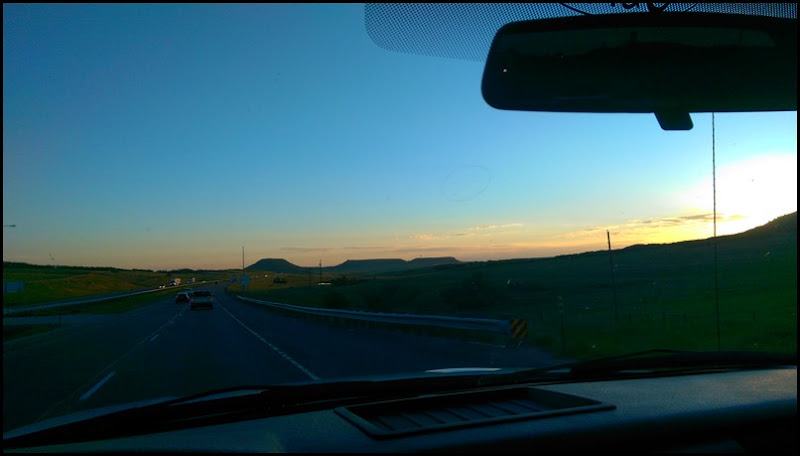 Sunrise on I-25 as we head to the airport.

We got there with 3 hours to spare! I wanted to be early, because the last time I flew, I had a bunch of grown-ups to hold my hand and tell me what to do. This time, I was on my own…with two children, 2 huge suitcases, 3 backpacks, a rather large car seat and something else making things more of a challenge. Not to mention, I had NO idea what I was doing, or where I needed to go! All I had was my reservation number and hope that people would kindly point me in the right direction. I was a big girl though and figured it out.

We parked in long term parking and got to hop on the shuttle to get a free ride to the front of the airport. My girls were all smiles on that short bus ride. In one day, they got to ride a bus, a train (the quick little train that takes you to your terminal), and an airplane. It was quite the adventure for them!

Here they are on the shuttle: 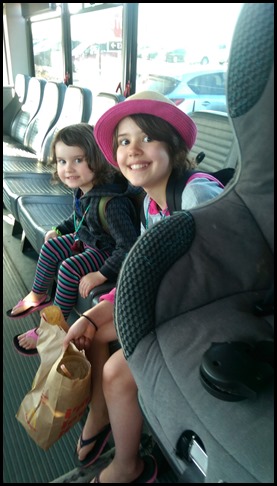 After I managed to drag all our crap off the bus and into the airport, getting on and off the elevator was, fortunately, the hardest part of the day. The doors kept trying to close on me as I shoved my kids in first, then dragged all our luggage behind me. Luckily, there was another poor Mom in nearly the same predicament as I, trying to do the same, so we were able to help one another out. After we got off the elevator, a gentleman pointed me in the direction of the check-in counter and from there, everyone helped me step-by-step figure out what to do next. Once all our luggage was whisked away, it was smooth sailing.

We made it through security with no problems. We didn’t have to remove our shoes, hoodies or laptop even. The guy operating the x-ray machine even joked with me for a minute as he saw the small toy Tiger in Cinderella’s backpack pop up on the screen. He asked her how she was able to manage smuggling a Tiger into the airport. The hardest part, was keeping my girls from petting the drug dogs, haha! They so very badly wanted to pet those doggies. But I explained to them that they were workin’ dogs and needed to focus.

Once we got through security without any troubles, we hopped on the quick little train that took us to our terminal. Lord I wish I had gotten a pic of their smiles on that ride! They were grinning from ear to ear so much, they had the whole train car of passengers copying their grins!

When we arrived at our terminal, we grabbed some TCBY smoothies (mine vegan, theirs not so much) and settled in for the next 1 1/2 hours. I talked to my Mom and Aunt and fessed up to them, that I had just done all of that by myself. I had fibbed and told them my Father-in-law was escorting us to the airport and terminal. I knew it would put my Mom at ease and leave room for little doubt. As it turns out, he was unable to make it due to an important meeting at work, and I assured him that I could manage by myself. I knew he’d have faith in my abilities, but I knew my own worry wort Mother would not be as easily convinced. So I let her continue believing that we were in his care til I got there safe and sound and in one piece.

I guess my Mom and Aunt both suspected I’d pull something like that, and as it turns out, neither of them were too surprised by my stubbornness to do so “all by myself”. It makes me sound as bad as my 3 year old, haha! My sweet, excited girls occupied themselves for the remaining wait with reading, coloring and watching the planes take off and land outside the windows. It doesn’t take much to keep them happy. 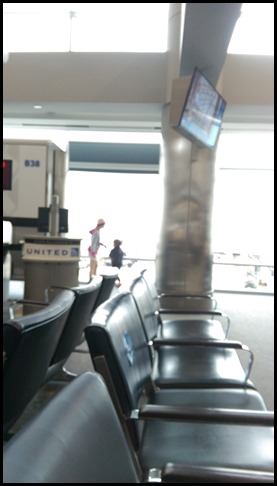 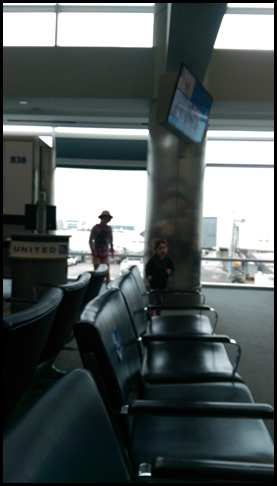 I survived the take-off and landing by heavily inhaling my Stress Away Young Living Essential Oil, haha! I’m fairly certain the guy across the aisle from me thought I was insane as I sat there literally huffing the stuff…but I didn’t care. It prevented me from having one enormous freak out in front of not only the whole plane, but most importantly-my children. When we landed, Nic was their to pick us up at the Dallas airport. He had been in town for the week for work, and it just so happened that he had a small window of time when he could grab us up and take us to my Mom’s. Talk about luck! Seeing his face was EXACTLY what I needed after everything I had just gone through since 4am Colorado time.

Thirty minutes later, and we were standing on the doorstep of my Mom’s RV. Yes, she lives in an RV, too. Where do you think I got MY gypsy blood from? We were all smiles as it had been almost a year since we last saw each other. The girls squealed with delight in the arms of their Grandma!

We settled in, kissed Nic goodbye (he had to get back to work), and decided to go on a quick walking tour of Grandma’s RV park. It was an awesome park. One I totally fell in love with right away. I can see why she felt right at home there the second she rolled in. We even played on the playground for a few minutes, before heading back for dinner. 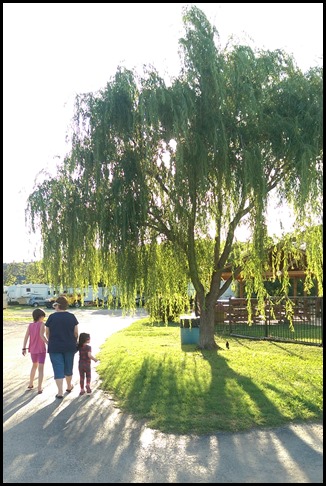 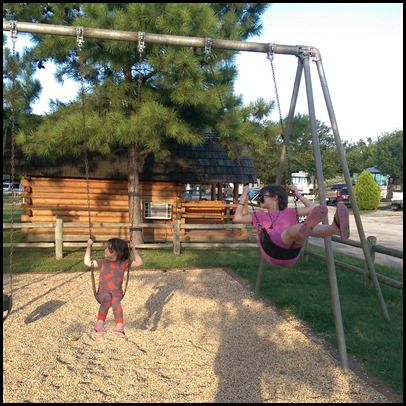 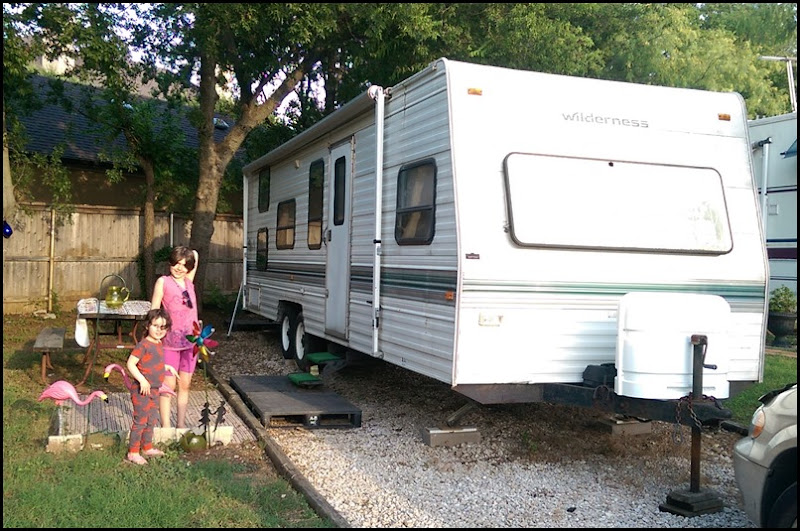 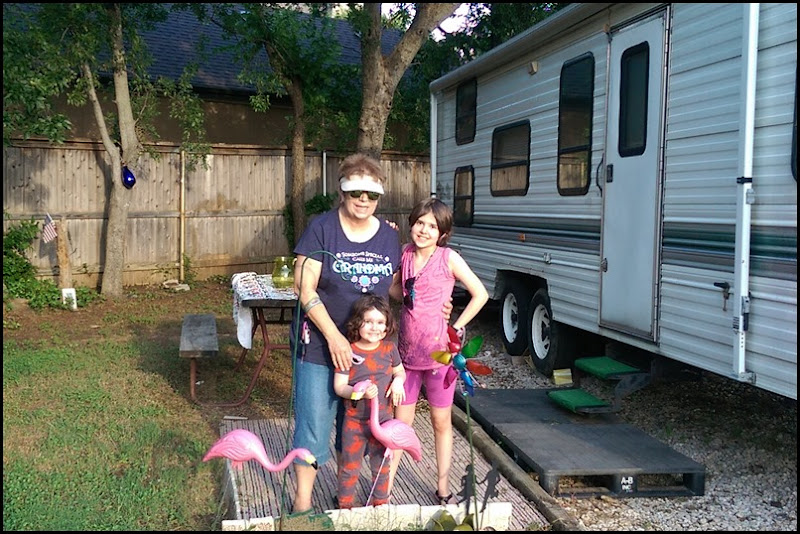 The next day, once we were well rested, we headed into Dallas to visit my brother at the hospital. It was Cinderella’s first time ever meeting Uncle Bubby, and the first time MHG had seen him since she was 4! It was a reunion long awaited, and one I was very much so looking forward to…despite the circumstances. It was so damn good seeing him again. 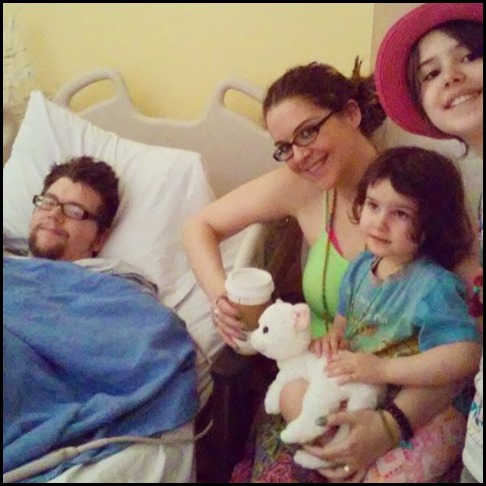 After we visited for a bit, the doctor came in to tell us he was finally being released! It was a joyous occasion, and we were thrilled that we wouldn’t have to celebrate he and Cinderella’s shared birthday in the sterile confines of a hospital room. I had a moment to sneak out and do a celebratory Yoga pose in the hallway. It was to be my last for the month of June. I had my hands WAY too full with helping him and Mom out, once we got him home. On a side note, let’s see how observant you guys are… 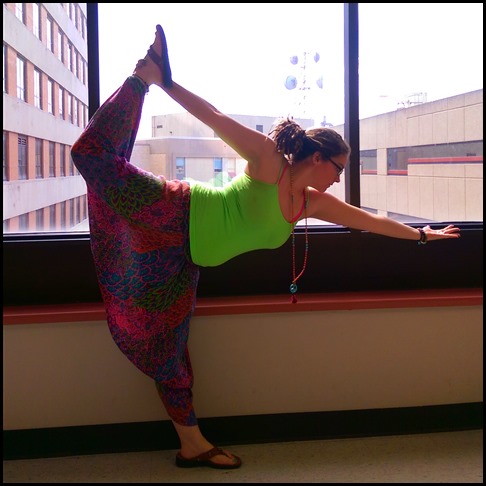 After we got him discharged and all of us over to his apartment, we settled in for a bit, caught up and gave him the drawings and paintings the girls had done for him before we left home. There was a decent amount of goofing off being done as well. 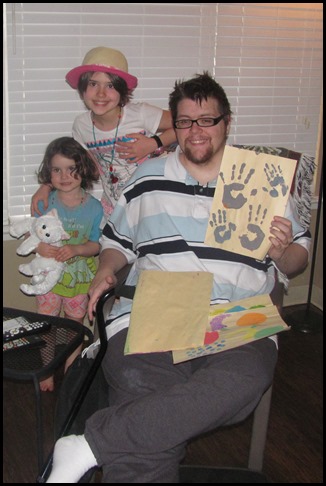 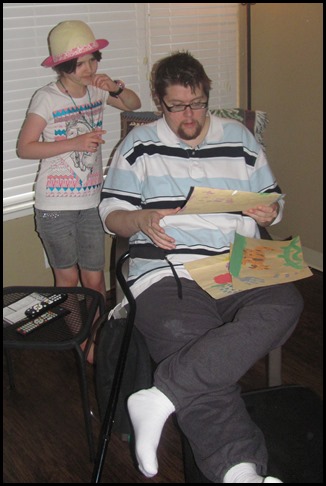 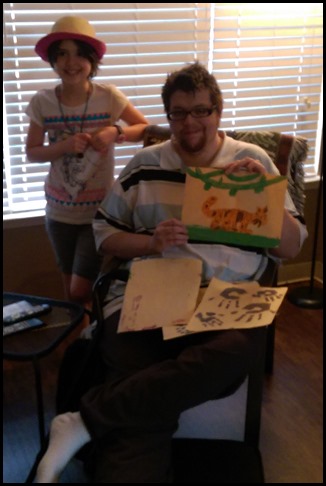 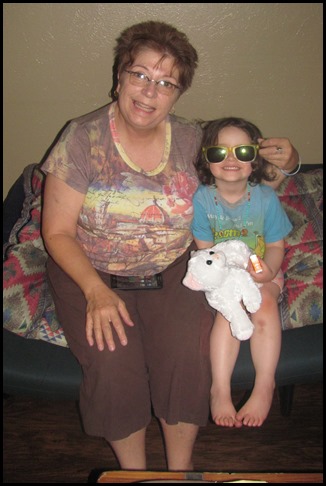 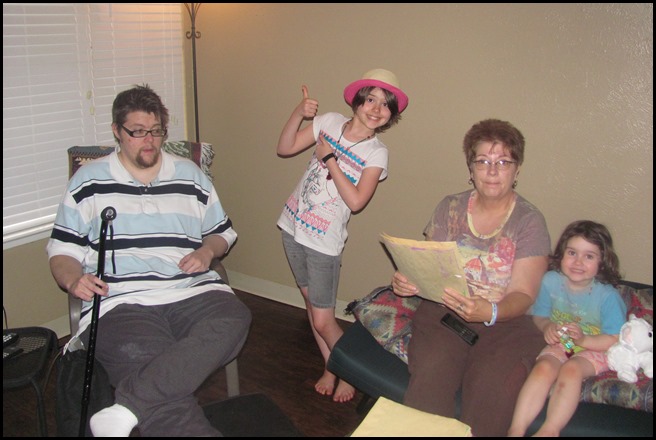 That night, we all crashed at his place. Everyone was far too exhausted to drive back to Mom’s home. 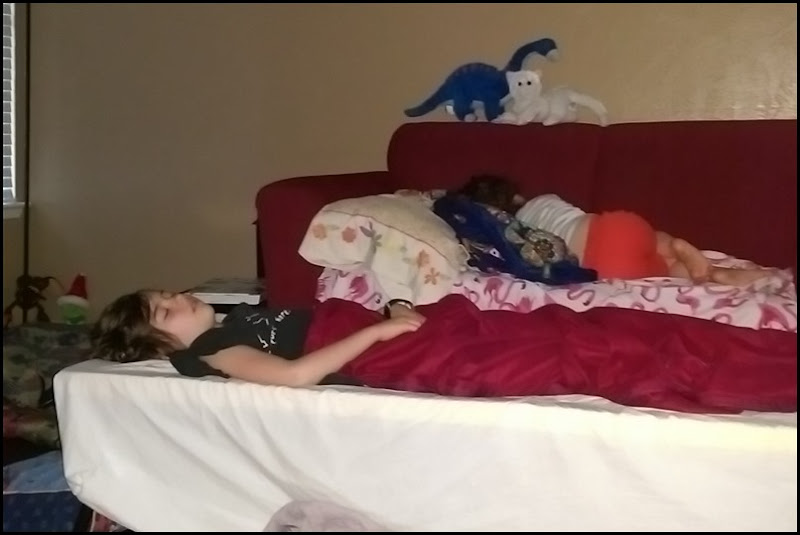 The next day brought with it some cuddles, a fabulous treasure from the greatest little herb shop and my brother beginning his journey into Dialysis. Oh, and my brother, always the great influence, taught my girls how to play video games. Believe it or not, I’ve successfully prevented them from learning how to play them for their whole lives. It took him only 10 minutes to bring down my track record. Thanks a lot Bro! They spent the next week glued to his PS3 playing some Lego Marvels game or something like that…when they weren’t socializing with the family or swimming, of course. 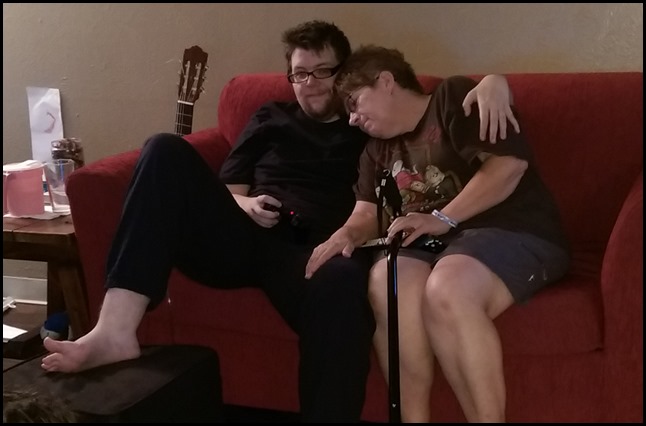 I LOVE this pic of them. 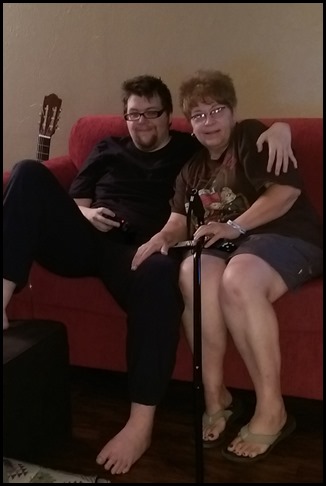 If you are ever in the Dallas area…near Irving…and you are in need of an herbal shop, you have GOT to check out this store! It’s called “Years To Your Health”, and is my new favorite haunt! I joined their mailing list and became a member (which is free), so I can order herbs through them via the mail. They are THAT awesome. While we were there, I found this little beauty! A Brazillian Quartz bracelet!!! I also picked up an infusion I was after (think herbal “tea”…minus the tea), and my girls got some treasures as well. They picked out some jewelry, crystals, and they each got a little trinket box. Seriously though, check out this bracelet!!! The energy emanating off this piece is incredible! That energy definitely came in handy over the next week. 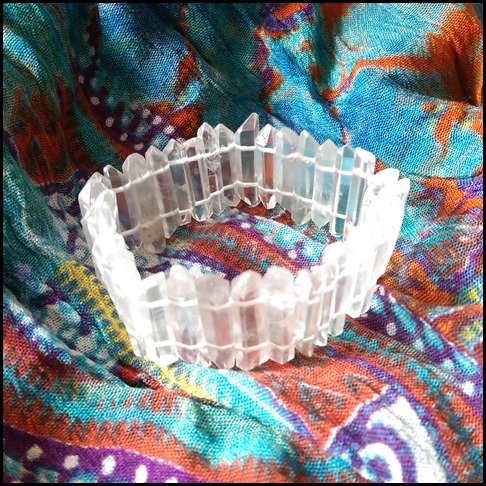 After our little shopping escapade, we came back to my Brother’s home in hopes that he got enough sleep. We took him to his first dialysis appointment outside of the hospital. We were hoping this place had far better bedside manner. The hospital he was at left little to be desired…or appreciated for that matter. I won’t name names JUST yet, but if they continue treating him so poorly in the future, you guys are gonna be hearing all about it. No one should be treated in such a despicable manner…especially when they are fighting for their life. No one.

Fortunately, this place turned our feelings about the healthcare system around. They took good care of him, listened to his concerns and past troubles and took it from there. I just hate seeing him this way, though. What I wouldn’t give to take his pain away. He’s so young…about to turn 28. I wish he didn’t have to go through this. His entire life has been one serious battle after another. This is his reality, folks. And it sucks. 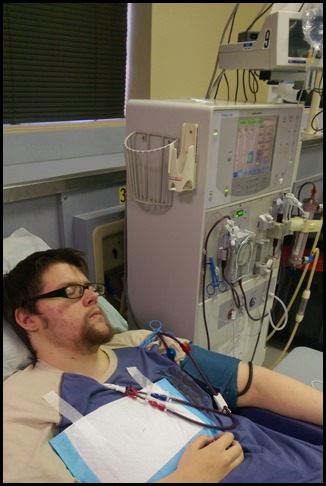