The Carolinas…or…Lay Off The Moonshine! 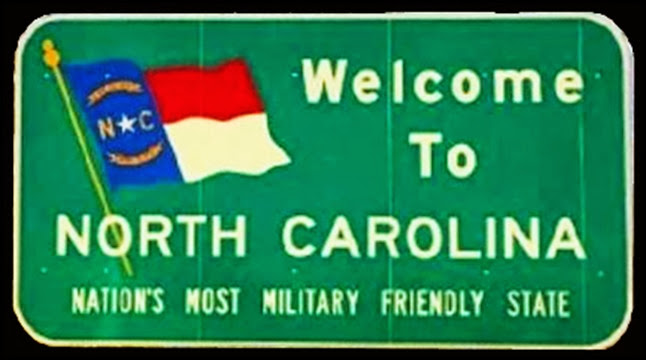 Once we had left Virginia, we had the best of intentions to spend the night boondocking at a Pilot or Flying J gas station in Charlotte so…we drove for a few hours. Along our way we encountered not one, not two, but THREE drivers that really should’ve laid off the moonshine. (Moonshine is a BIG thing out in these here parts, lol.)

As we are encroaching our third hour on the road, we are on the top of a hill headed down and can see for a good long distance. Up ahead, we see 3 vehicles. In the right lane, there’s a semi with a car in front of him, and a car in the left lane right beside the semi. From our vantage point, we see nothing out of the ordinary. We assume that eventually, the semi will get over in the left lane, ride that guys butt until he gets over, and then he’ll pass them both. Well, in the short amount of time that we are watching this, we are coming up to them all…

Just as we caught up to them (we’re in the right lane as well), the car in the left lane finally passed and the semi got over also, leaving us to have to slam on our brakes (and lock up all 8 of them) as the drunk driver suddenly decided that 20 mph was a much better speed to go in a posted 65. It all happened so fast and completely without warning. We were able (by the grace of God) to slow down enough to not hit the A-hole that had too much moonshine. We got over to pass and luckily didn’t have to deal with him on the road again. It all happened so fast and it definitely scared the crap outta us.

That scenario happened TWO MORE TIMES. Each time with a bit of a variation. We don’t make a point of riding anyone’s butts, because obviously we need a lot more time and room to stop. However, when everyone is driving the speed limit and we have our normal “safe” distance between us and the next car, but that car all of a sudden decides to just DROP SPEED for NO FREAKING REASON, it leaves us with no choice but to slam on our brakes. Quite a few RVers have told us that it’s completely rare to lock up trailer brakes, but we did…Every. Single. Time. I will add here that every time that happened, we had someone in the lane to our left so we were never able to just get over to avoid the idiots. Although, even if the lanes had been empty, you still can’t make that quick of a swervy move in a truck/trailer combo. Nothing is fast when you’re hauling 10,000 pounds 31 feet behind you! Getting up to speed takes time, getting over takes time, slowing down takes time and obviously stopping takes time. Hell, backing up and turning take time, too. Oh, and nothing is ever easy.

After our fantastical encounters with our drunk drivers in North Carolina, we stopped for gas. This is about the time when Nic realized that “I” left the roof vent open above our bed. Thanks a lot Nic. I never did such a thing! I always check the RV over diligently before hitting the road. My job is to batten down the inside, his is to batten down the outside, and right before we launch, we both do a final walk-through and walk-around.

I remembered that was the vent that was “stripped” out and couldn’t be opened anymore…well, it can’t be closed once opened. You have to go up on the roof and push it down while someone inside cranks the stupid handle. We had no need for the vent in Virginia, so once it was pushed shut we never bothered with it and completely forgot about its little quirk. Apparently, as we were driving down the interstate, the side vent above the oven flew open, causing the cabin to pressurize and that pressure blew open the vent above our bed. I know, I know, so many crappy vents we have, lol! Nic took a couple seconds and a couple zip ties and shut both the vents for good and that was the end of those issues.

Remember when I said that we had planned to boondock for the night in Charlotte? We weren’t the only ones with that plan in mind. We pulled into 3 Pilot & Flying J’s and there wasn’t a single parking spot open anywhere! The entire truck stop side was completely full, there were truckers pulled over on the on and off ramps to catch a couple hours of shut eye…that’s how bad it was! We just kept driving until we could find somewhere…anywhere…

By the time we crossed into South Carolina it was midnight. We found the welcome center full of truckers and pulled in right alongside them. We were so relieved to have a place to spend the night. We were all hungry, exhausted and by this point, the girls had been asleep a couple hours and we were soooooooo ready to join them.

I woke them up, ushered them into the RV, and fed everyone a dinner of Peanut Butter and Jelly sandwiches. Just as they were brushing their teeth, Nic came in to inform me that there were 2 signs posted stating “Stays Longer Than 2 Hours are Prohibited” and “Patrolled by Law Enforcement”. Great. It’s 12:30 in the morning…I just wanna go to bed. Why don’t we just cross our fingers, go to sleep and if the cops show up, tell them our troubles and hope they care.

No…no…god forbid we “break the law” to not pose more of a hazard by driving tired. No, we wouldn’t wanna do that!

We loaded everyone (including the cats) back up. FORTUNATELY, there was another Flying J 2 minutes up the interstate that had plenty of RV parking open. Heck yea! We unloaded everyone back into the RV, jumped into our beds and by 1am, I’m pretty sure we were all passed out within seconds!

The next morning, we hopped in the truck bright and early and headed for Uncle Ron’s in Atlanta, GA. South Carolina is a GORGEOUS state as well! The whole friggin’ East Coast is gorgeous…especially in the Fall!

Just before we hit Spartanburg, SC…at which point thoughts of our friend “The Barbarian” come to mind, we are treated to this…er…treat? It’s the water tower in Gaffney, South Carolina. How clever. It’s a peach! 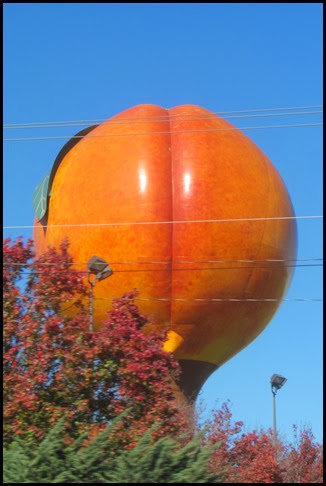 Spartanburg, SC, as I just said, makes me think of our friend the Barbarian…who also considers himself a Spartan of sorts. I’m pretty sure his email address even says Spartan, lol. I hope you’re doing well good buddy! 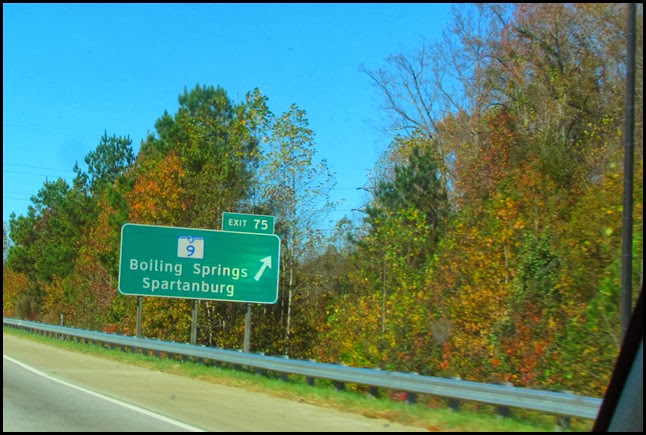 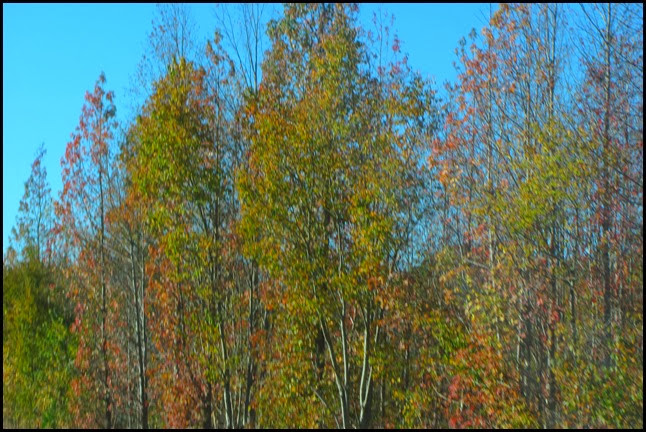 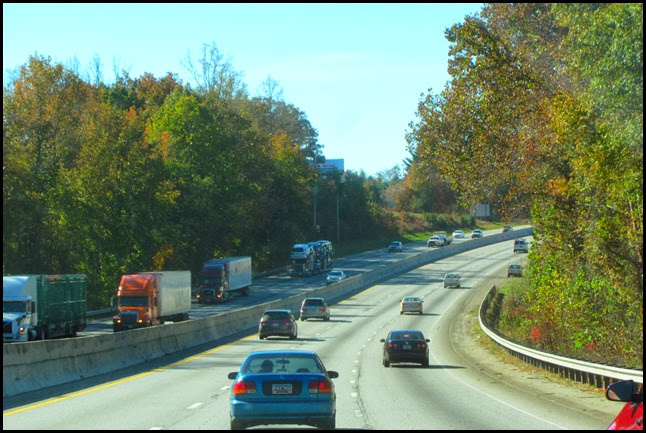 LOVE, LOVE, LOVE the Fall color on the East Coast!!! 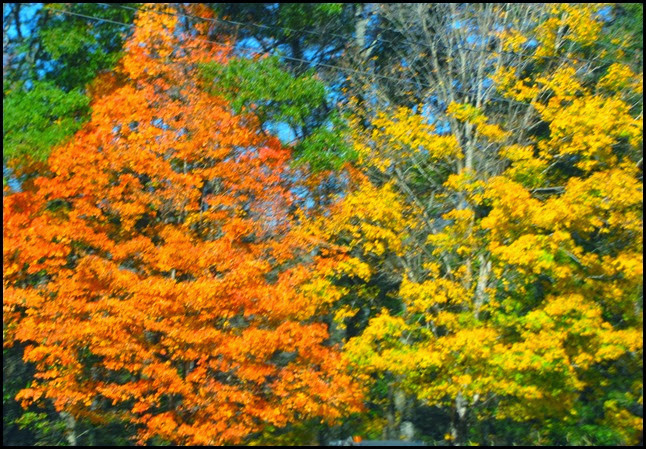 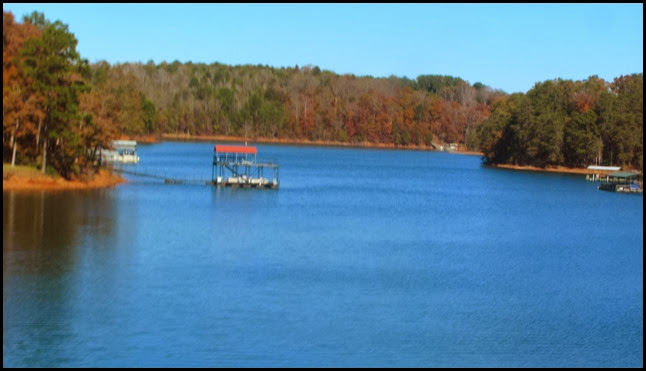 I love this man! He’s so calm under pressure…not that we encountered any drama in South Carolina…thank goodness. The previous night was a true test to his driving skills though for sure. We just decided that we HATE driving in the dark and hopefully it can be avoided in the future. 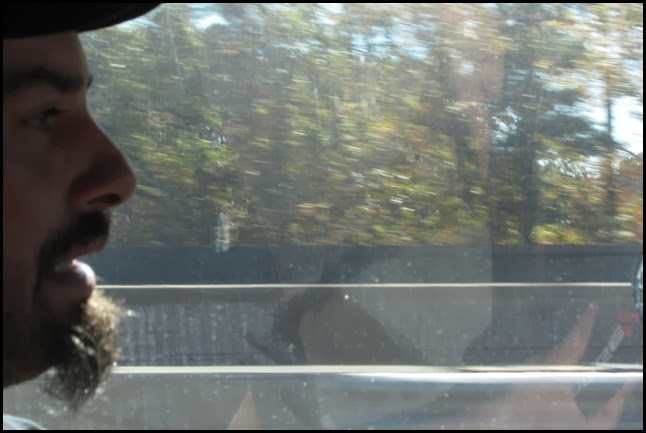 If the girls didn’t look like this, they were either passed out, gazing quietly out the window or occupying themselves with no whining. Seriously. I have two of the easiest kids on the planet for road tripping! I am incredibly grateful for that, by the way! 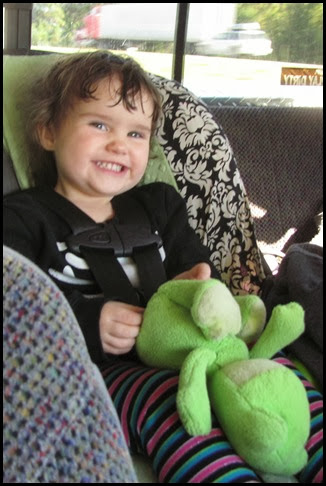 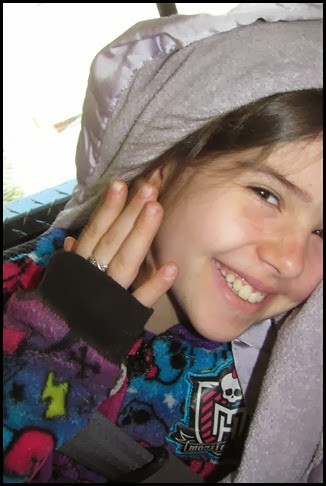 Oh, btw, the hoodie to Cindy’s left is covering the two kitty carriers. They are NOT easy to travel with…they meow incessantly. They ride up front with us. We can’t bring ourselves to put them in the trailer during transit mode. We’re too scared that they’d try to hide under the bed and get smashed by the boxes under there if we accelerate or brake too fast. Oh, and we don’t wanna do it even with them in their carriers and strapped down in the trailer, either. It’s very bumpy and loud with everything moving around in there…they’d probably die from fear, knowing those two. But seriously, their constant meowing had us almost wanting to ditch them somewhere along the highway…just kidding…kinda… Seriously…we would NEVER do that. They are our sons. 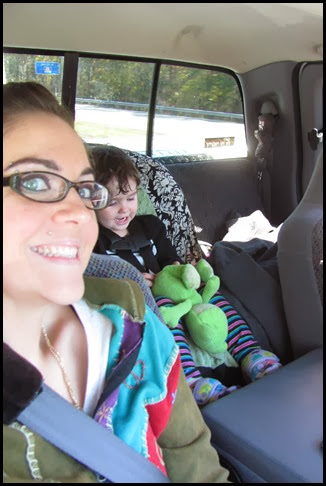 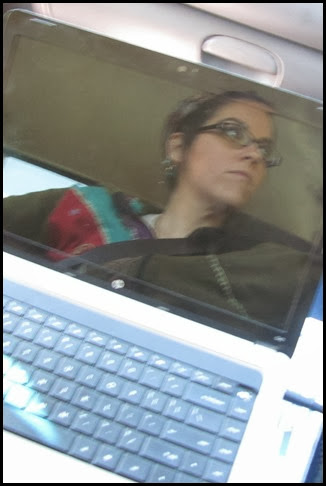 I spent the whole trip with my laptop on my lap as well as the old school paper spiral bound map. I’m the navigator (we also have the gps active too, but sometimes it’s wrong). With my laptop, I use the Good Sam’s Club trip planner because it tells me where all the Flying J’s and Pilot gas stations are. That’s crucial. Our Dodge 2500 V-10 gets like 5 freaking miles to the gallon, so we’re stopping pretty much every 2 hours and we can’t exactly fit in just any ol’ gas station, and not every truck stop that sells diesel, sells gasoline, either. So, it’s very important that we know where all those specific gas stations are. 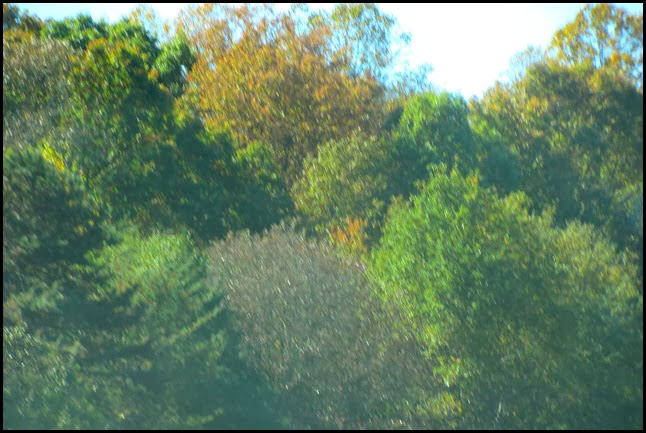 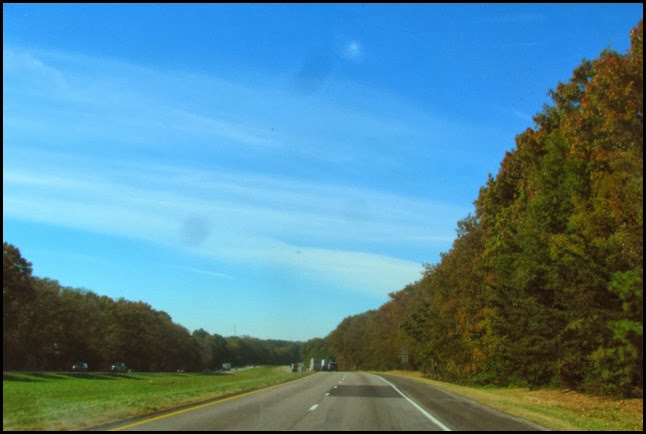 Goodbye Sunny South Carolina. When I was in 6th grade, I won 1st place for the most creative float project about you. I learned a lot back then and for 16 years, I’ve wanted to visit, to see if you really were THAT beautiful. As it turns out…you are! I would love to get to spend more time in you in the future, but for now…it’s on to Georgia to see Uncle Ron, Mike and Bailey! Here we come guys!!!