Part 2 to “Georgia On My Mind”

We are headed from Virginia to Arizona for work. We spent the night in South Carolina at the North Carolina border. We visited a couple nights and a day with Uncle Ron and Mike in Atlanta, GA and hit the road again Sunday morning. So here we are. Pulled over at a rest stop, just a handful of minutes before hitting the Georgia/Tennessee border, and we have a “situation” on our hands.

Anything that we have experience up until this point, suddenly seems like NOTHING! The drunk drivers in North Carolina were a breeze compared to this. This situation wasn’t exactly a physically intense situation, but mentally, and emotionally, we were about to reach wit’s end.

We see that the center tread on our rear, passenger’s side RV tire is now missing. I’d be willing to bet that it was 1/2 mile back up the highway when we heard that somewhat corrugated sound that sounded like we drove off the road into the shoulder (we hadn’t). 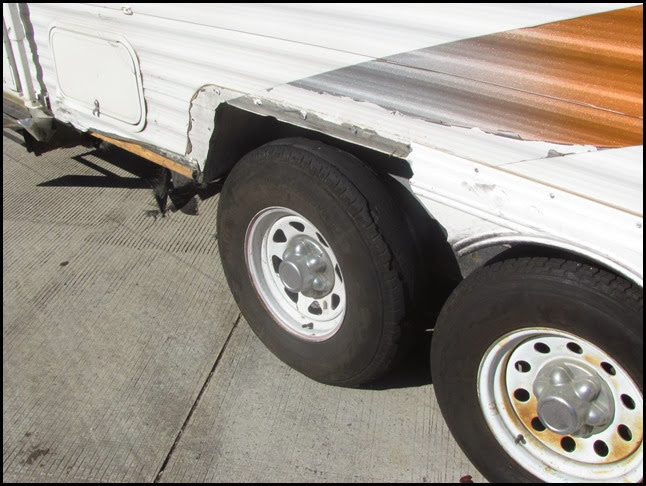 It’s so hard to see, because I was too frazzled to take a pic of the metal culprit at the time, but this is what we think happened. In the center of the pic below, you can see a somewhat metal piece jabbing towards the tire. We’re thinking that when we had backed down Uncle Ron’s driveway and dragged “stuff” along, that “stuff” was not only the stairs (and possibly the stabilizer jacks) but this metal piece on the corner of the wheel well too. As we backed down his driveway, this piece got dragged forward (toward the center of the tire) and was left jutting out. When we pulled out of Uncle Ron’s to leave Sunday morning, we did a walk around and even checked the tires, but this piece of metal must’ve slipped our once over.

Sooooooo…we’re driving up the Interstate for 2 hours and with every bump in the road, the RV is bouncing down toward the tire causing the metal piece to make contact with the center tread. Eventually, the tire has enough and the whole center stripe flings off, destroying everything in its path! And boy oh boy did it destroy a LOT of stuff! 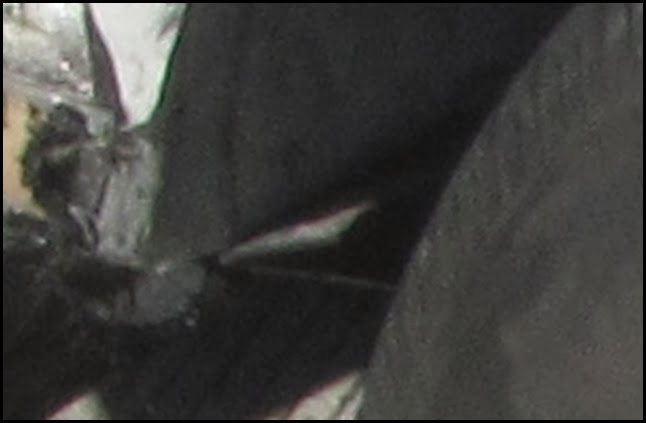 Here we have a picture of the cloth stuff that the aluminum siding, frame and insulation is held together by on the underside of the RV. The trim along the bottom of the RV was ripped off almost completely. You can see how the aluminum was blown off the frame and bent upwards. 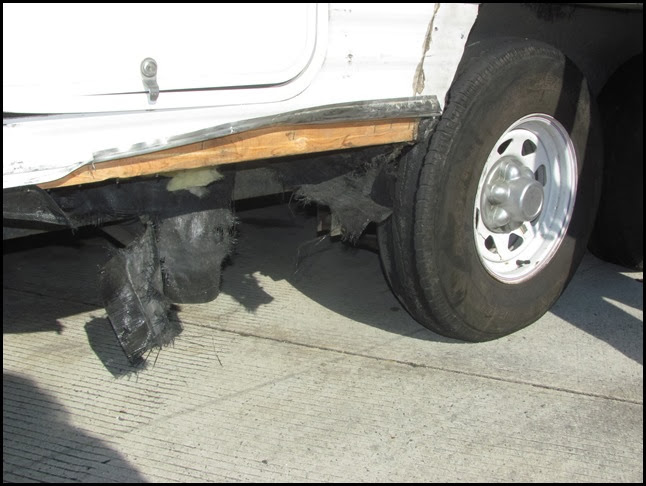 Here’s the trim hanging on for dear life. It curled backwards from the wind I’m assuming. The trim around that locked compartment (to nowhere by the way) got separated from the RV on its bottom left corner. 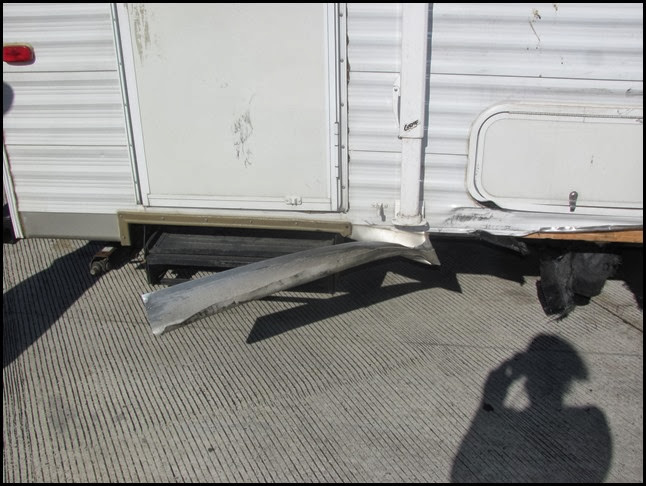 The back half of the wheel well decorative thingy is now gone and probably half a mile back up the road somewhere with the tire probably. We got the risers (I call them Lego’s) setup and the front tire pulled up onto it. Good thing we bought a spare tire and 6 ton bottle jack before we left Colorado back in June!

*Sidenote* In hindsight, the Lego’s were unnecessary in the jacking up the RV process. 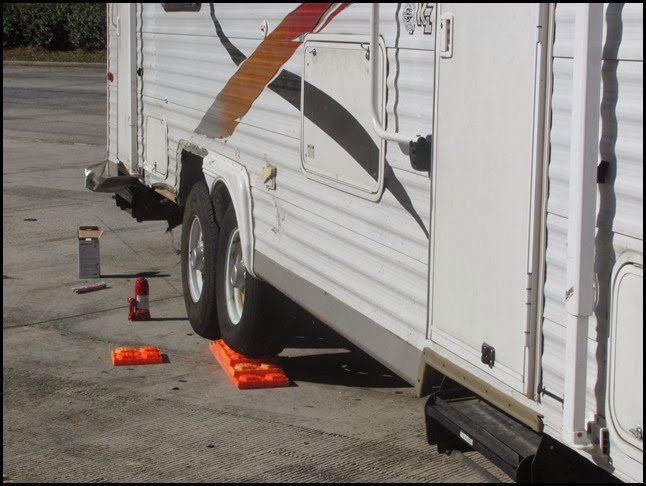 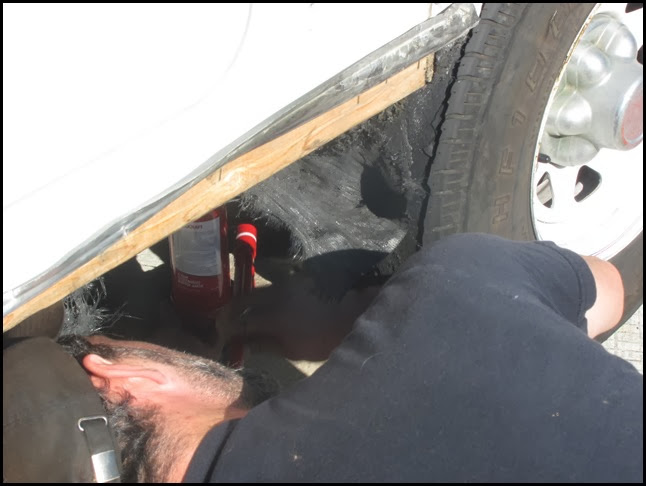 …and jacking it up. 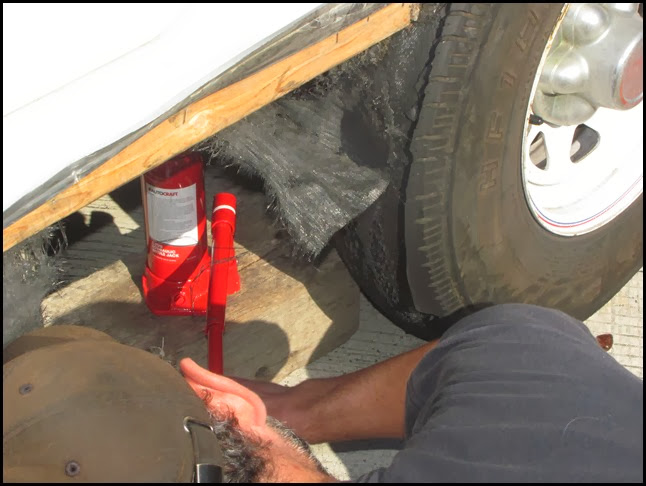 I should also mention here that he put that wooden block underneath the jack before he started jacking it up. 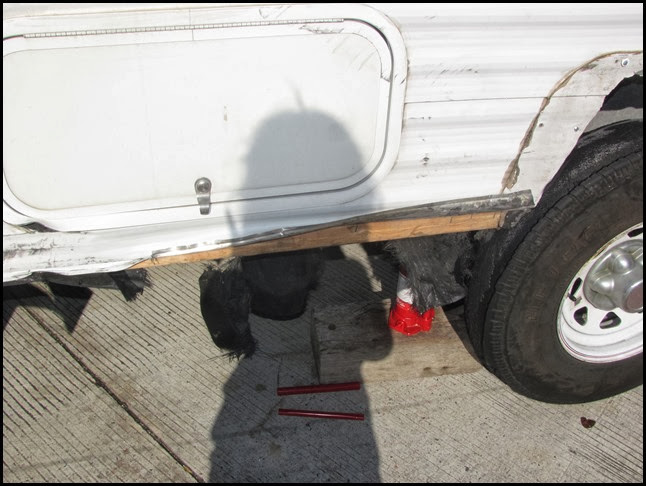 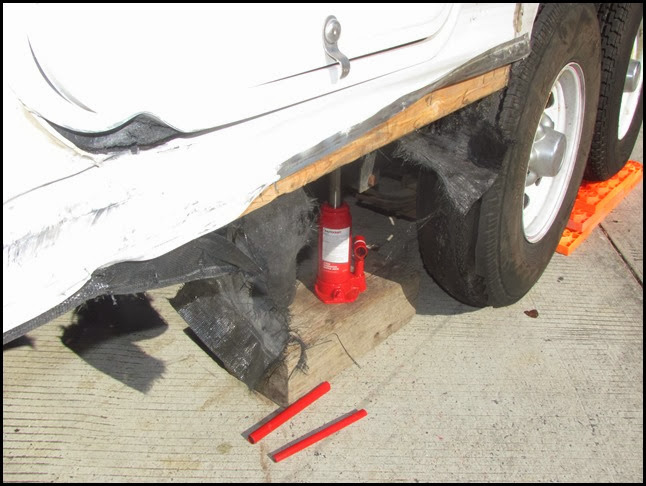 Here’s a better angle of the under RV damage. Ugh. Note the missing center tread. Only the steel wires were left poking out. I kept worrying that it was gonna blow at any minute. 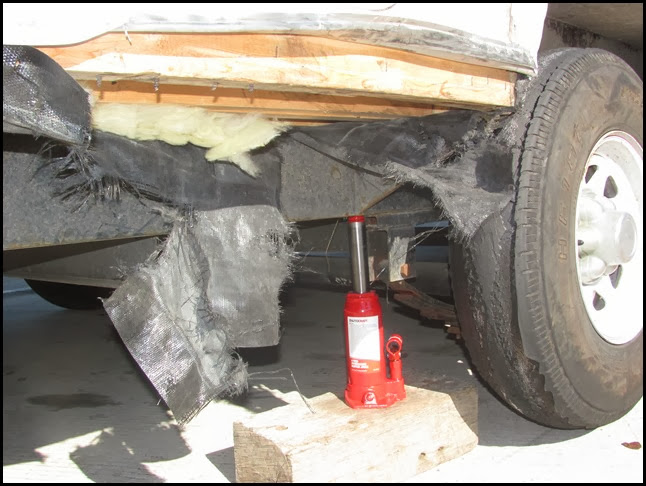 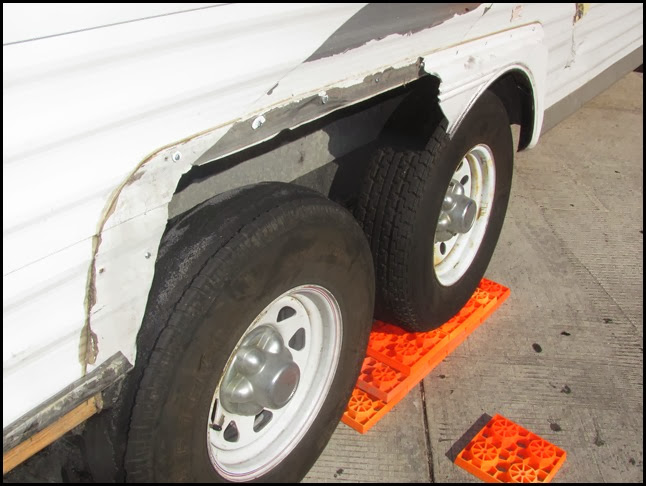 The freaking outlet cover was even blasted in the process. It’s just a couple feet in front of the wheel well. We’re gonna have to replace that soon. There’s also a not-so-noticeable, though notably large, dent between the front of the wheel well and this outlet and under it…and there’s black tire tread marks everywhere in between. 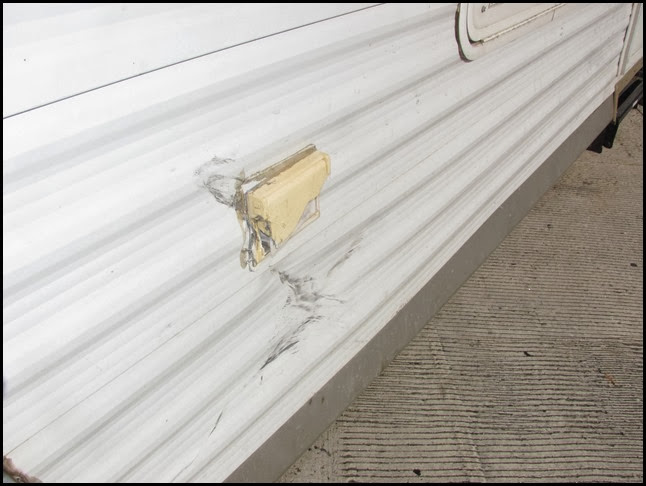 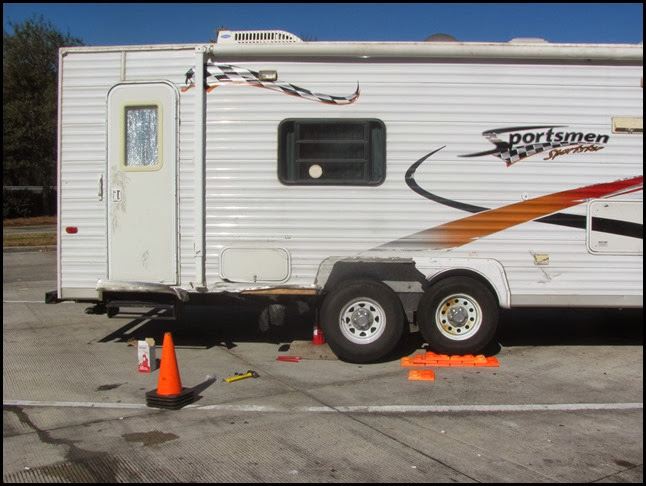 Nic grabbed his socket wrench and started to remove the lugs. The next thing I know, a sweet old man came up to us with his electric powered impact driver to remove them a LOT faster! 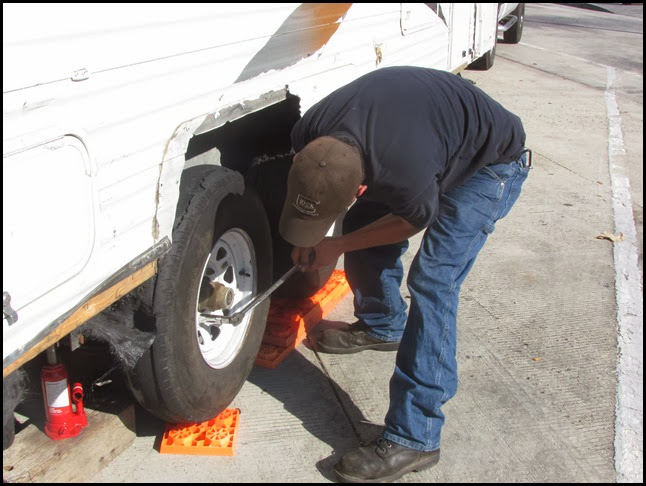 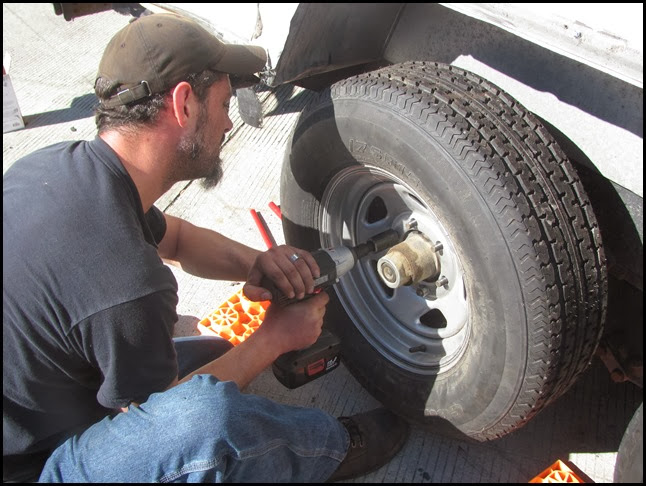 Nic and I were a bit shaken up from this experience. We’re both Cancers in the astrological zodiac and that makes us both a couple of worry-warts. We don’t think the tire completely blowing would’ve killed us, but we’re pretty certain a lot more stuff would’ve been jacked up…and possibly the truck too. It freaked us out a lot to consider what COULD have happened.

The old man was a “Good Samaritan” to us right at a time when we needed him. We could’ve changed the tire without his drill, though it did make the process a lot quicker, but he was also a fellow RVer and much more a veteran at it than us. He talked with us and calmed ME down and explained that these things happen and we would’ve been fine even if it had blown. We’d be ok, we were prepared for it (what matters most), we handled it and we’ll move on all the wiser from the situation. After about 30 minutes of Nic and I shaking and trying to settle our nerves, it only took 15 minutes to change the tire. He put all the lugs back on with that gentleman’s impact driver, but ended up “setting” them with his torque wrench. We lowered the RV back down off the jack and pulled forward off the Lego’s.

We let the majority of the air out of the bum tire to show to our friends and family in Colorado, scooped up all of our destroyed RV pieces and threw everything in the bed. Nic hammered the crap out of the metal culprit back into its place, hammered the aluminum back down to the frame, ran some sheet metal screws through the siding into the frame, ripped the remaining trim off and cleaned up shop. All of that took another 15 minutes, while I got the girls out for bathroom breaks and a cigarette break for him and we were back on the road. We were an hour behind schedule now, but we didn’t care. We were safe and that’s all that matters.

To our Good Samaritan whom was on his way home to Tennessee: THANK YOU SO MUCH for your impact driver, but especially for your wisdom, and for being in the right place at the right time. We were two seconds away from moving into the woods behind the Rest Stop…permanently, before you came along. The fear from that experience was just about enough to do us in. We were definitely ready to throw in the towel. We will probably never meet you ever again, but just know that you made a HUGE, positive difference in these two rookies’ lives. Thank you from the bottom of our hearts. We will never forget your act of kindness. Because of you, we were able to hit the road again and with a bit more confidence than the hour prior. 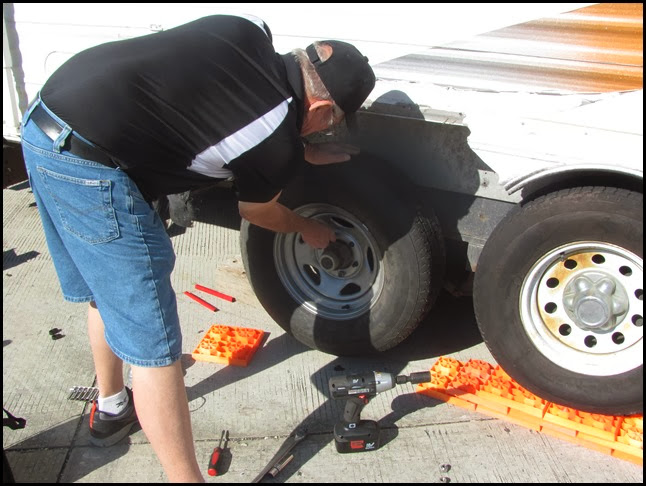 We hopped back on the road…literally…because the on-ramp from the Rest Stop to the Interstate was bumpier than anything I’ve ever experienced while hitched up. Another miracle. If the exit ramp into the Rest Stop had been that bumpy, I guarantee you that we would’ve blown that tire.

Oh, *side note* we will not be making an insurance claim on this incident. It isn’t worth the $500 deductible (and the inevitable raising of our rates from doing so) to make a claim. We can fix everything cheaply, so for right now, we just have to deal with the aesthetically displeasing appearance in the meantime. There was no driveability damage, only cosmetic, so it really just amounts to “not worth it”.

After all that excitement, we crossed into Tennessee a few minutes later.