What A Bunch Of Slackers!

Thanks to my beautiful friend Elyssa (you can check her and her awesome family out here: http://fallowground.weebly.com/lysss-blog.html ), I’ve been introduced to the world of slacklining. The definition of slacklining (as per Wikipedia) is:

“Slacklining is a practice in balance that typically uses nylon or polyester webbing tensioned between two anchor points. Many people suggest slacklining is distinct from tightrope walking in that the line is not held rigidly taut (although it is still under some tension); it is instead dynamic, stretching and bouncing like a long and narrow trampoline. The line's tension can be adjusted to suit the user and different types of webbing can be used to achieve a variety of feats. The line itself is usually flat, due to the nature of webbing, thus keeping one's footing from rolling as would be the case with an ordinary rope. The dynamic nature of the line allows for tricks and stunts. Slacklining has quickly become popular due to its simplicity and versatility and its ability to be practiced in a variety of environments. Those who participate in slacklining are often called "slackers".[1]”

We haven’t gone as far as to purchase a Gibbon’s slackline off Amazon, or anything like that, but my Husband (outta the blue Thursday night 8/15) busted out one of his tow straps and hooked it up between our truck’s hitch and our RV’s hitch. He pulled the truck forward, til the line was taut, threw on the e-brake, and we were in for loads of family fun!

Slacking is sooooooooooo much fun, but I’ll just let the pictures speak for themselves. Btw, I actually made it completely across without bailing out, but of course, no one was taking pics or filming at that second. :( 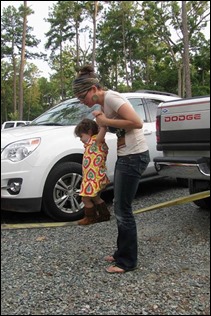 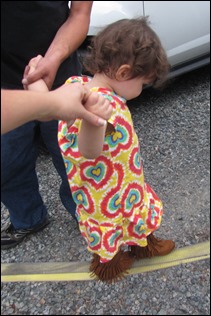 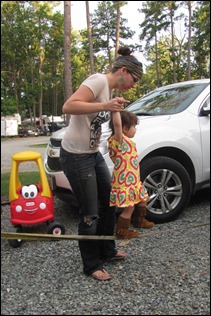 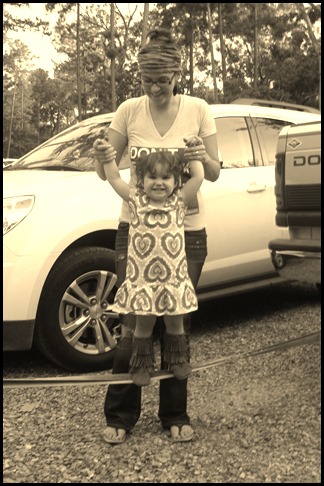 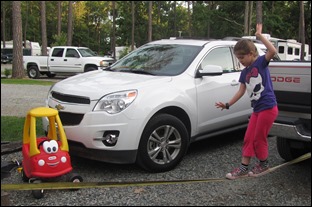 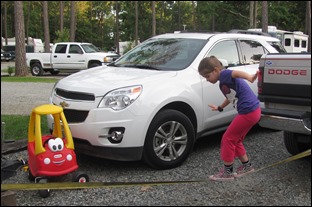 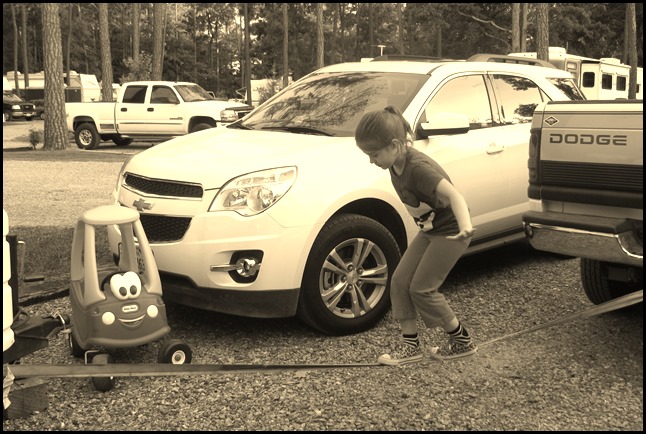 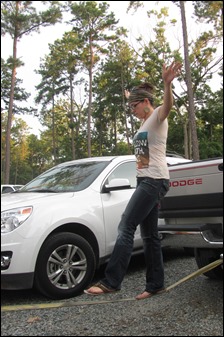 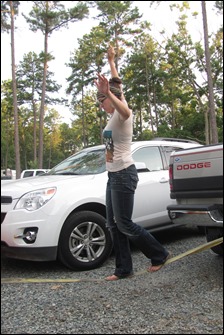 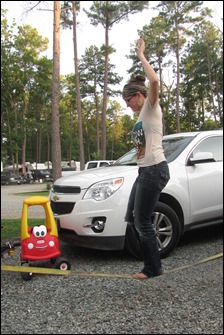 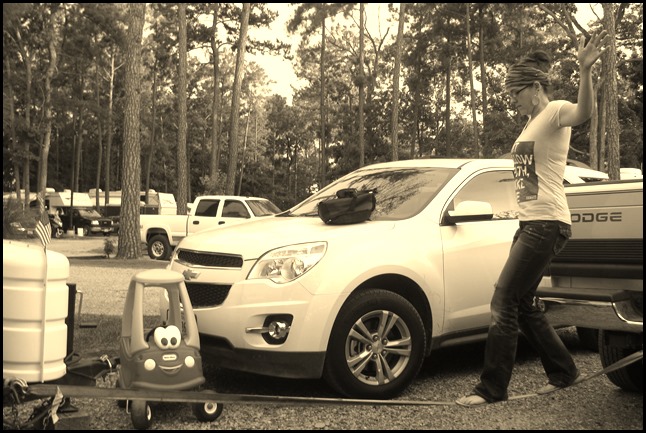 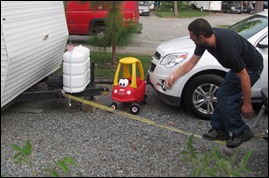 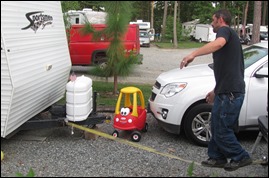 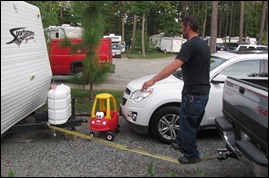 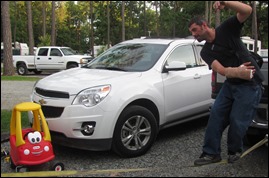 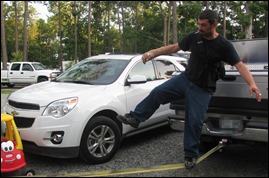 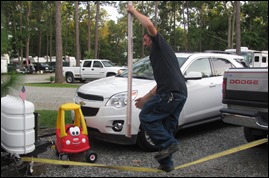 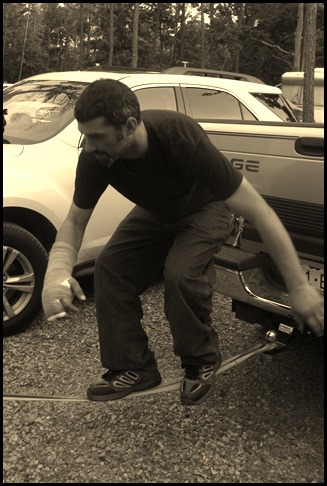 Ahdoo was hysterical to watch! He had us in stitches the whole freakin’ time! He thought approaching it from a snowboarding stance would help him. In reality, it just made it more difficult to put one foot in front of the other. At one point, he brought over a beam to hold up to help him balance…it didn’t help at all, but it did make it all the more enjoyable to watch him! He made it across, but from the middle point, he pretty much just jumped to the other side, lol!

What no one can see in the pictures, is that once you get to the center of the strap, it bounces and moves in incredible amounts. THAT’S what makes slacklining so difficult and so much fun! It is an incredibly fun workout. It works all the finite muscles in your legs, abs, and butt that you didn’t even know existed. Seriously, I woke up the next day and it felt like I did 200 crunches the night before. It builds up strength in your ankles as well. I would totally suggest it to anyone, but I would suggest you hook it up between two trees over grass. That way, when you bail out…or fall off, there’s no risk of injury. :)

If anyone gives it try, post your pics and/or comments to our Boho Hobos facebook page here: https://www.facebook.com/BohoHobos?ref=hl! I would love to see everyone in action! As a final side note, we used a two inch tow strap, Elyssa informed me, that the skinnier strap you use, the easier it is because you can get it tauter and therefore not moving as much. Oh, and a ratcheting strap would make your lives (and ours) a LOT easier. Just an idea. Good luck everybody! If at first you don’t succeed…………..it’s still a TON of fun!!!