This was a couple weekend process…and is still a work in progress. We have quite a few things that are a more important financial commitment. For the time being, the bench seats are going to be on hold until after we get to our next destination. In the meantime, here is what we have accomplished thus far.

Due to the injury to my Husband’s dominant hand and lack of proper tools, we have only been able to get started. We walled off the left bench seat and are holding off on the right one until we get the appropriate tools. My Husband was not pleased with how they turned out and wants to wait until we can get our tools back (i.e. table saw, chop saw, compressor and nail gun) from storage in Colorado. He wants to completely rebuild them at the point…from the frame…up.

Two weekends ago, this is where we started out. The stair (which will serve as the outer lid because it has a lip on it), the 1x1’s (which we used to build the frame) and the plywood (which we used [originally] to wall off the sides of the benches, were all stained. All wood had to be stained in order to be protected so it will last longer. MHG helped Ahdoo with that task. Here they are about to stain the stair…it is Red Oak. (It ended up not matching our other wood…AT ALL…so we’re going to have to re-sand it and stain it an incredibly darker shade of brown.) 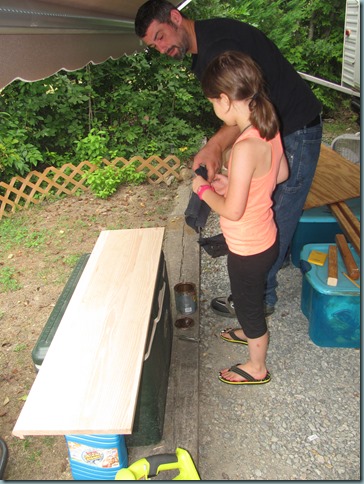 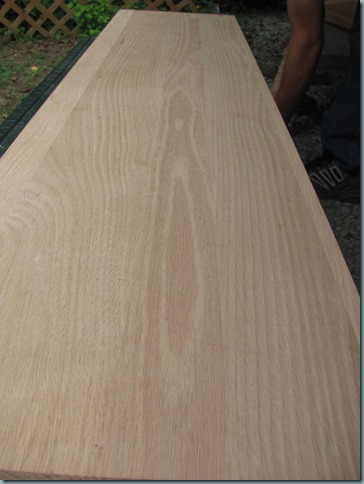 Since they were both on a roll with the staining, they ended up staining the wood that frames out our slide. It turned out GORGEOUS, but we don’t think it’s going to match the final result of the dinette. It will most likely end up being covered up with a frame of Red Oak that has been stained the same dark, dark brown that we’re going to re-stain the Red Oak stair. 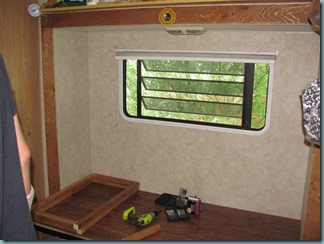 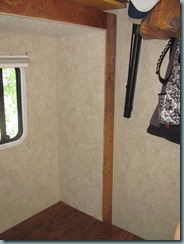 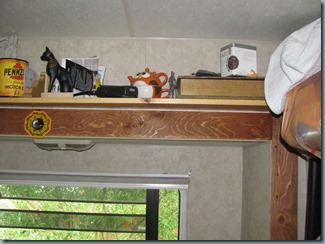 Next, Ahdoo and I took down all the measurements to build the frame out of 1x1’s. I made the cuts initially with the skill saw, but as it turns out, he can make much better cuts with his non-dominant hand than I can with my dominant one, lol. After all the cuts were made, we screwed all the pieces together to come up with two of these per bench… 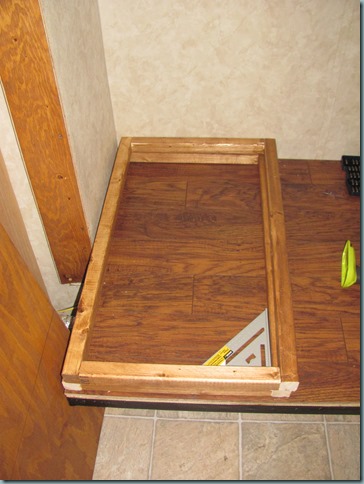 Then I went ahead and cut the 1x1’s to build the standing supports to finish off the frame. (P.S. That’s not a bruise on my leg, it’s grease from the tools.) 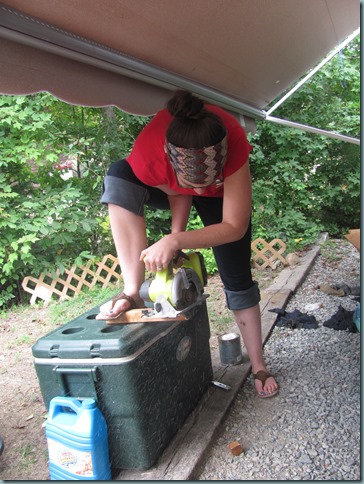 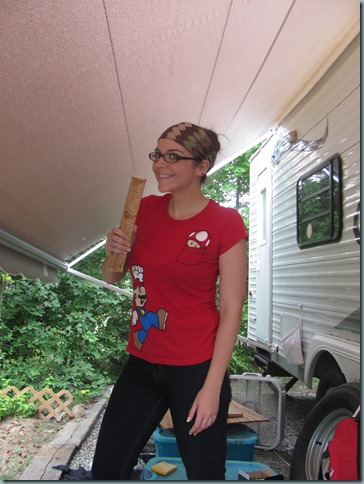 Once the standing supports were all cut, we went inside to secure them to the top and bottom frames. We attached them via L-brackets and also reinforced them with 2” screws. We gotta have these bad boys super sturdy. 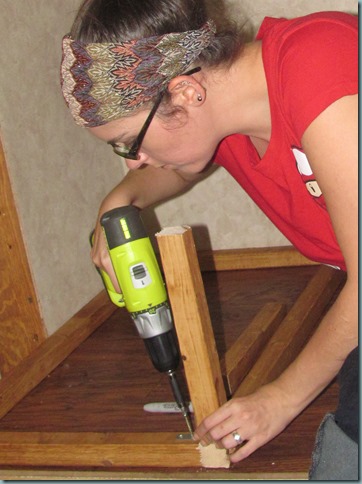 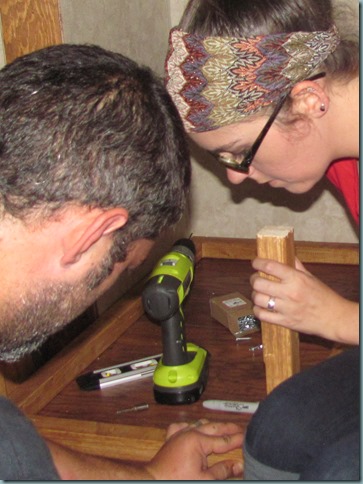 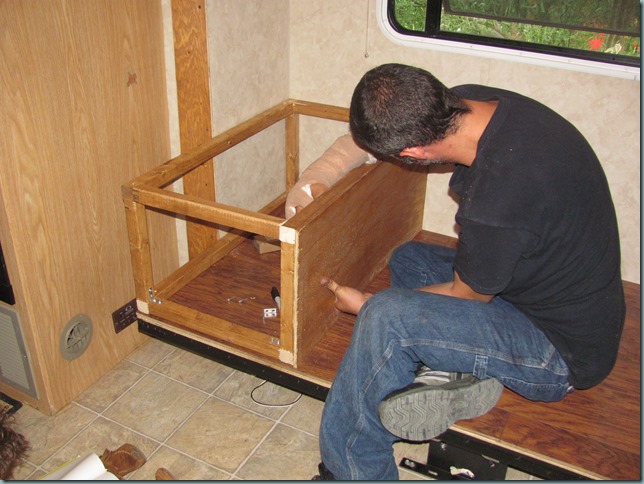 We did the same with the front end, and the backside that nobody can see (except me) and just for fun, we cut the end off the stair and set it on top.  We were still deciding how we want to make the lid. Do we want it to be all one piece that just lifts off, or do we want to hinge it? We couldn’t decide so we just left the stair on there, without finishing the back piece of the lid and went on to start the right bench. He thought he was done once we repeated the whole process to make the other one…boy was he mistaken. 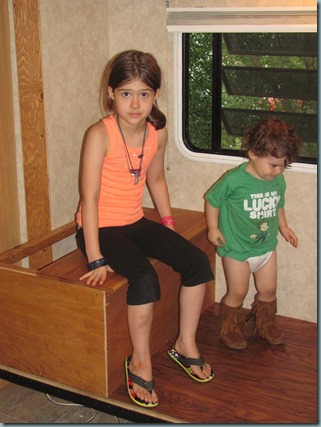 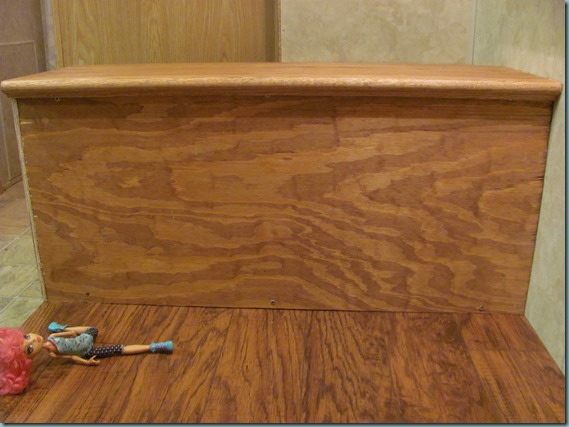 We hated it. (As a side note, I told him before we even started that the plywood…stained or not…would look terrible.) The plywood looked so tacky next to our beautiful, hand-scraped, Pergo, pre-finished hardwood floor. We argued about what to do next and set it aside until this past weekend. We spent that week scheming and trying to decide what would look best. In the end, I got my way, and we ended up using the same wood that we built our floor out of to wall off the left bench. It gives it the appearance of being completely built in. I love it! Him…not so much.

The wood looks FANTASTIC, but without a nail gun, he was forced to pre-drill the holes and hammer in each nail by hand. Also, he didn’t use the headless nails, and although they ARE the brown nails, you can still see the heads of them. Last but not least, without a chop saw, he was unable to cut them to perfection, which irritates his perfectionist side and doesn’t like how the boards do not all line up straight. I do not care, because they’re all going to be covered up by the lid. He says that ultimately, when it comes time for us to put the trim on and the crown molding along the length of the slide floor, it will cause problems for us. I am not the expert, he is, so I’ll just take his word on it.

So, unfortunately, I am left looking at a gorgeous left bench, and a non-matching right bench for at least another month. I should not sound so ungrateful though. At least we finally have somewhere to sit! In the meantime, because we are halting all forward progress, for another month, we’re going to go pick up a card table to at least have a makeshift table to eat at and do homework. It’ll get us by just fine until we can pick up where we left off. Besides, as big of a pain in the butt that these benches have been, we haven’t even BEGUN to argue about how we want the table to be…or look! Should it be removable? Positional? Attached to the wall? The floor? Should it have a leaf? Fold away? Hideaway? SO MANY OPTIONS!!! No, no. I am fine with waiting and using a card table for now. I would like to put that headache off for as long as possible.

Without further adieu, here are the pics of the semi-“finished” and newly improved left bench, and a pic of the right bench that gives you a good idea of how very different they both are.

Here he is pre-drilling the holes…yes, I have already crammed as much crap into the benches as I possibly can… 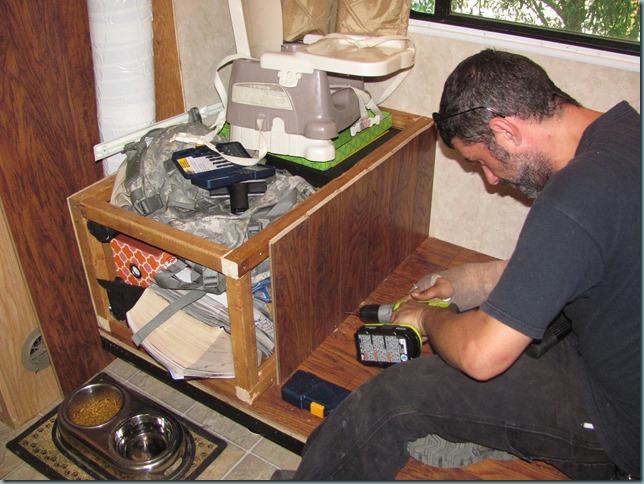 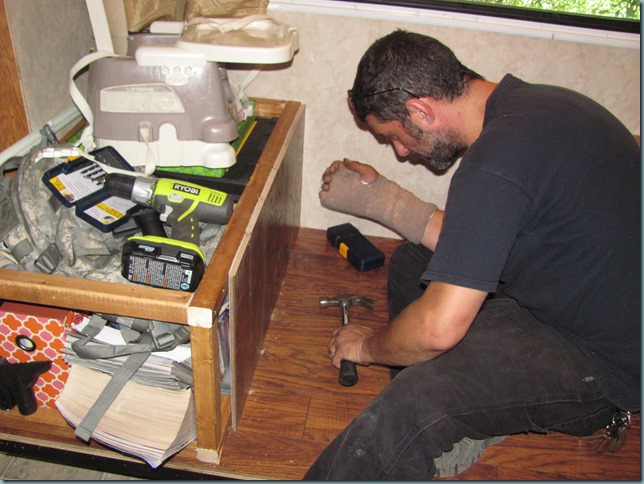 …measuring the last piece of wood for this side. This piece is cut both at the top and at the side. 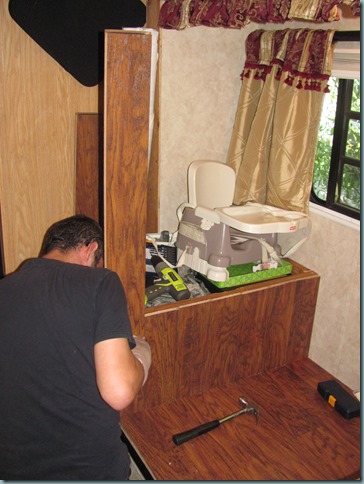 Here, he and Cindy are started to side off the front end. By the way, he took the plywood siding off first. I thought he’d attach the flooring wood to the plywood, but no, he said structurally, it was not necessary to keep it. Plus, he didn’t want it to be thicker. The right pic is of the other bench and how different looking (and ugly) it is compared to the newer bench. 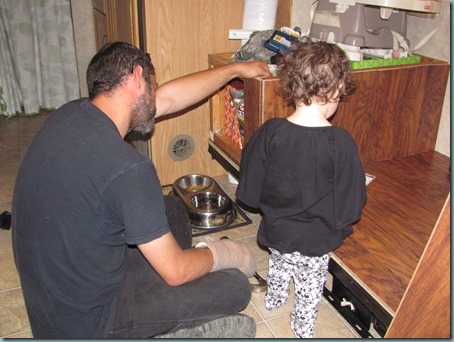 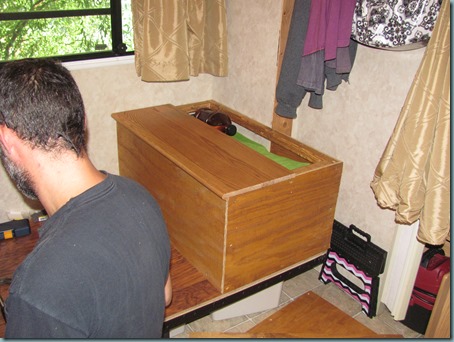 As you can see, the lid does not vibe well with the rest of the bench (or floor) so it is going to be re-sanded and re-stained a much darker color. If that ends up not looking very nice, we’re going to build the lid out of the same wood as the bench and floor, reinforced underneath with plywood and the grain will keep going the same direction…opposite of the direction the grain on the lid is going in the pic below. 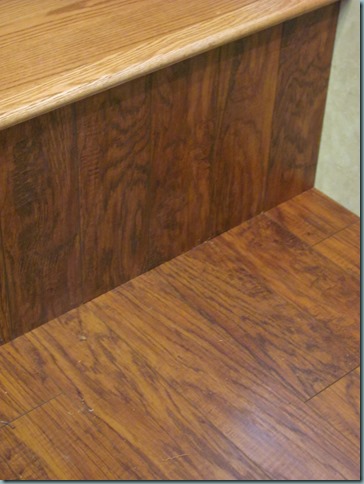 After they are completely finished, we are going to put up black trim at all the joints, seams and corners. We want to have a very distinct separation between all the transitions. Also, a lot of the stuff in our kitchen is black (i.e. stove, fridge framing, microwave) so we think it’ll tie it all together.

Oh, and last but not least, he bought a security camera and installed that. I do not even want to know how many holes he poked in the side of our home. He’s got a lot of girls to look after. That was his reasoning behind the purchase. Here he is, standing at the front door, while we get it a test run. Please ignore the mess. 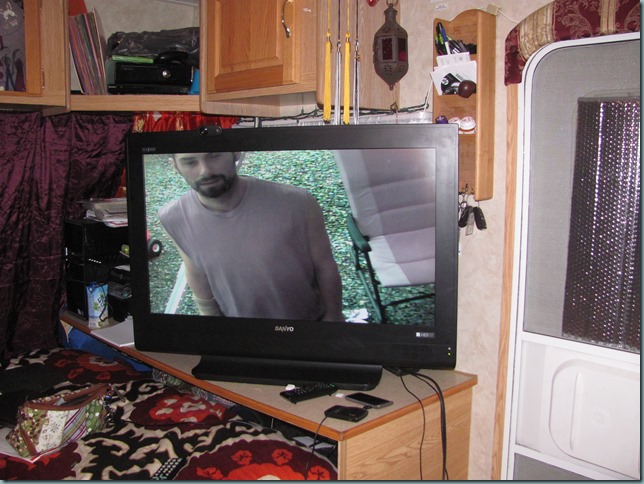 I’ve got more to blog, but it’s late, I’m tired and Cindy has decided to help me blog for the last hour. She’s on strike from sleeping. Oh the joys of two year olds!  :)  Until next time.