I LOVE baking cookies! It seriously is my specialty. Once we moved into our RV though, I was burning stuff left and right in the oven. I was really scared to take on the task of baking cookies, for fear that they would be ruined too. (I’ve only been cooking with a gas stove/oven for 4ish months now.) Well, in the past couple weeks, I haven’t been burning the pizzas I cook for my family, so I thought I’d finally take a stab at some cookies…with one catch…they WILL be Vegan. If nobody likes them, that’s too bad (I really hope they like them), but all the more for me if they don’t.

So, on Tuesday the 27th, MHG and I rummaged through my pantry to see what we had in stock. Oatmeal, no raisins. The fixings for chocolate chip cookies…but no chocolate chips. Almonds, but not pecans or walnuts. The list goes on and on. Eventually, I flipped the lid on my oatmeal and lo and behold, a recipe for “Vanishing Oatmeal Raisin Cookies”. Ok, I thought. I’ll just replace the raisins with Craisins and tweak it in other places to make it Vegan and a tad bit healthier. So without further adieu, I give you, “Vanishing Vegan Oatmeal Craisin Cookies”.

Here’s what you’ll need (I will put the original ingredients we substituted in [ ] if you want to make the non-Vegan original version):

I am pleased to report that they were a success. They weren’t burnt, or still raw on the inside. They were absolutely delicious and EVERYONE loved them!!! They only lasted 24 hours. Lol! (P.S. The BEST part about Vegan cookies is you can eat all the raw dough you want without worry of getting sick! Yay! 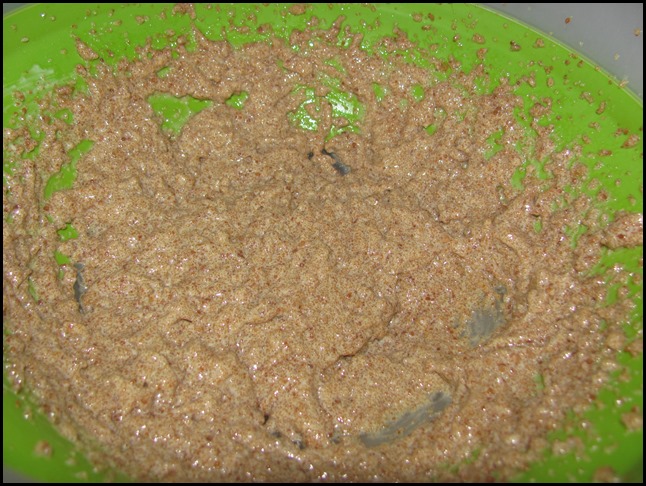 The Earth Balance “butter” and sugar creamed together. 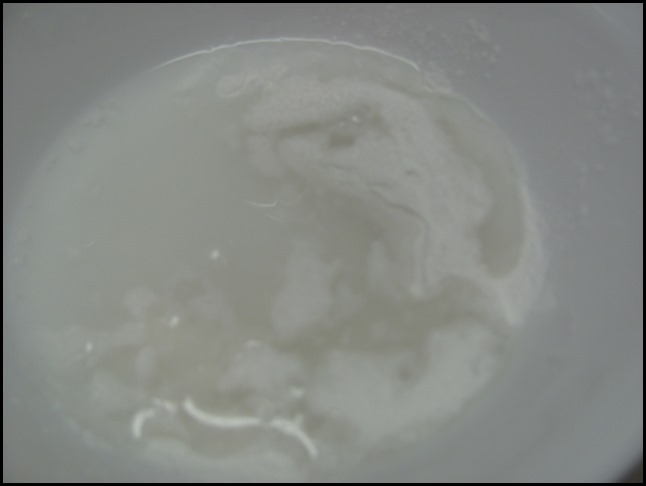 The Ener-g and water mixed together. 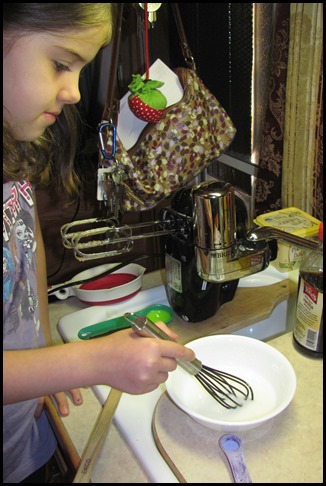 MHG mixing up the egg replacer. 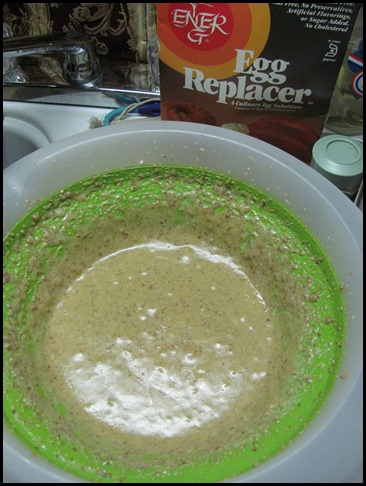 The egg replacer added to the original mixture. 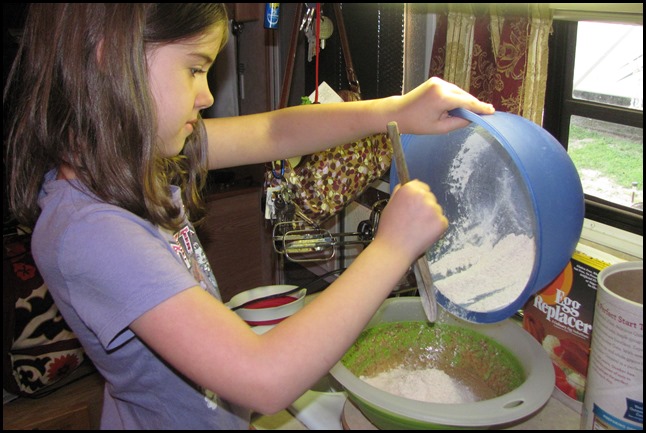 P.S. That green bowl is a collapsing 3 quart mixing bowl by Progressive International. I HIGHLY recommend it to all my fellow RVers. The blue bowl doesn’t collapse, but I store all my other collapsing bowls of various sizes inside it. 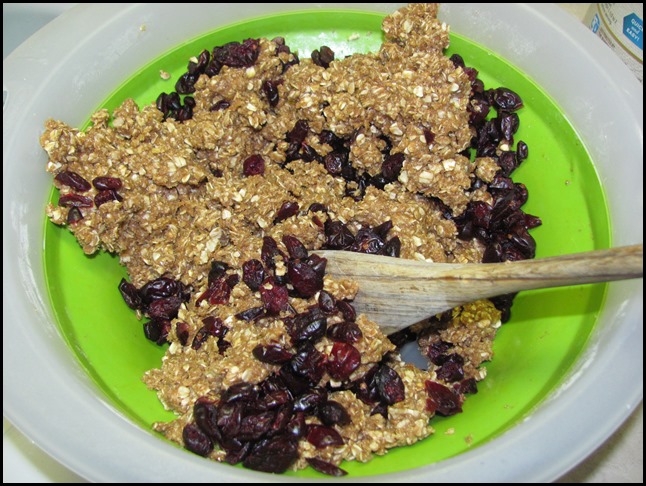 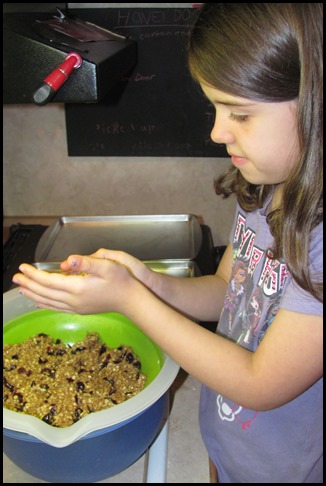 The fun part! Rolling the dough into balls… 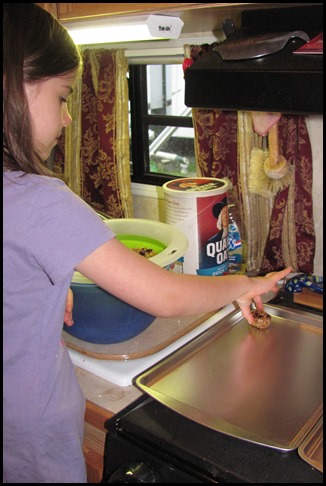 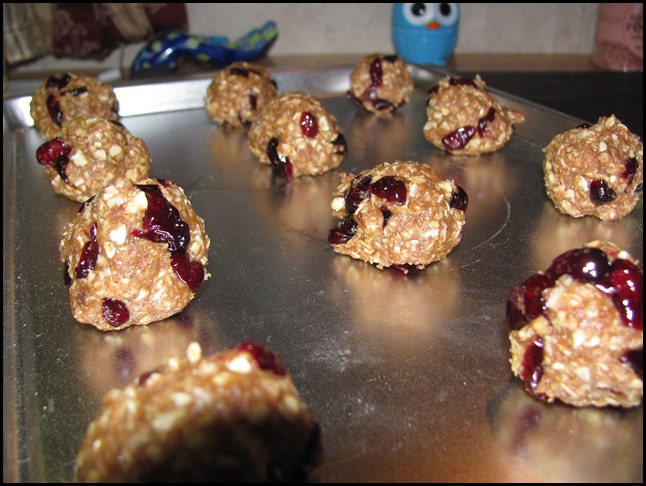 Be sure to press them flatter with a spoon before throwing the into the oven. 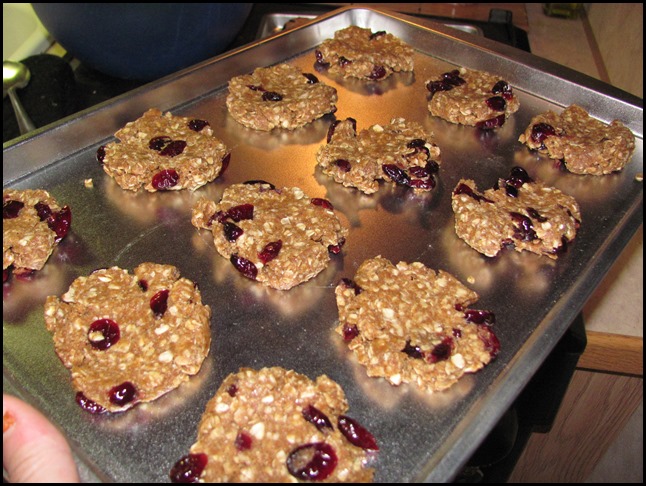 If you press them, they’ll come out looking like this. 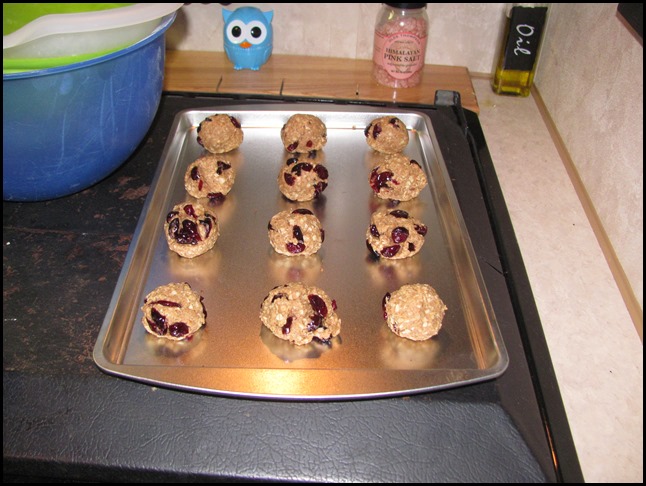 If you don’t press them, they will come out looking like this instead. It’s just a matter of aesthetics though, because they taste delicious either way.

P.S. replacing the eggs with egg replacer will make your dough a bit harder to hold together. Make sure to tightly pack the dough. 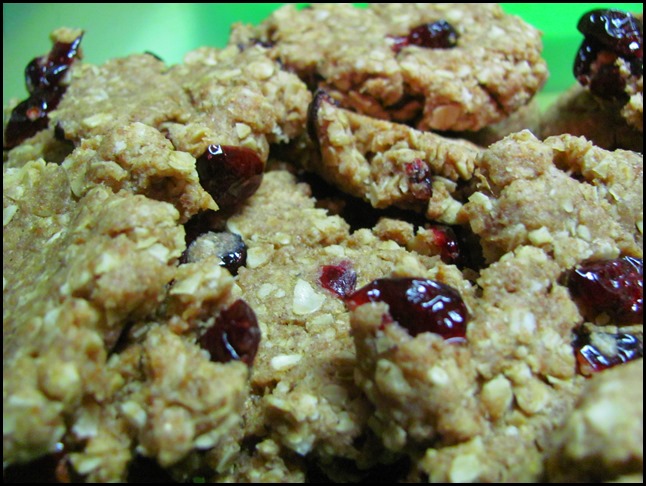 Why don’t you give ‘em a try! I promise you that you will not be able to tell that they are Vegan. Everyone will love them (as long as they like oatmeal cookies) and they are healthier for you too. Much love!!!