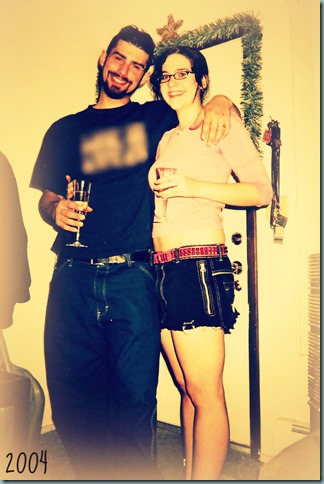 (Above: Goodbye 2004. Thank you for bringing this man into my life.) 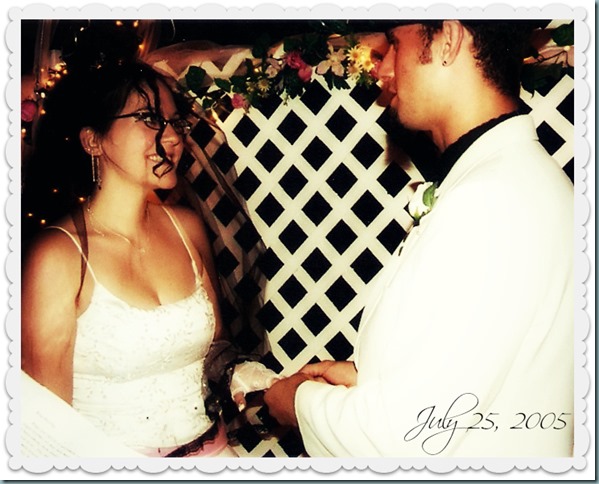 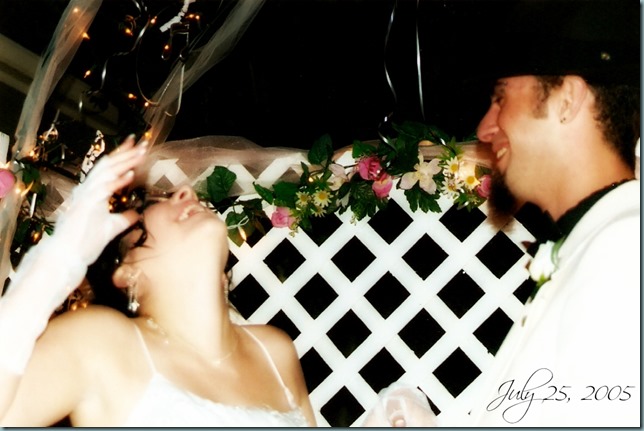 (Above: We’re laughing because as he went to “Kiss the Bride” he pulled my head back accidently with his hand on my veil.) 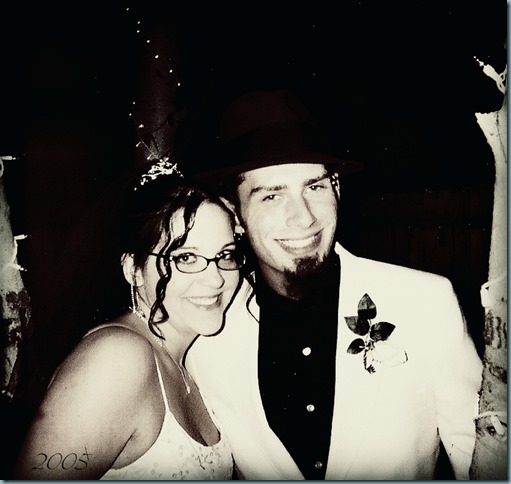 We celebrated our last months of childless independence (though not like the old days). We were expecting our baby in January. We were elated and absolutely terrified at the same time!!!

(At 6 mo pregnant, I was a pregnant Tigress for Halloween…obviously. He was a dead stud.)

We welcomed our first beautiful daughter into this world on the eve of January 13, 2006. It was Friday the 13th AND a Full Moon. She was perfect in every possible way. 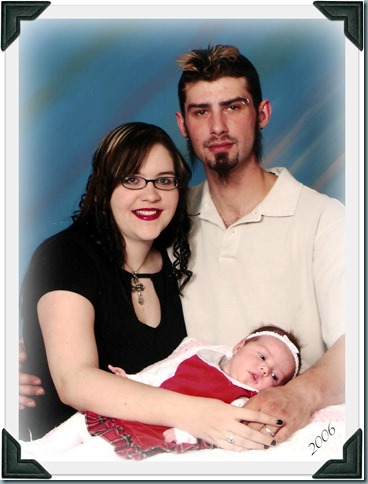 Near the end of 2007 we hit some troubled waters… 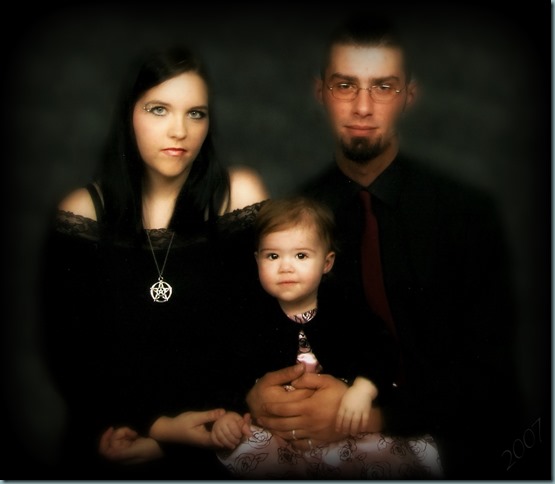 We attempted to fix things but nearly fell apart again at the end of 2008…one of the few good things about that year was my Husband signed up for school to get a degree in HVAC. While he worked on his studies, he met a fellow classmate that ended up being his boss, co-worker, competition in school and best friend. His wife became my best friend. The company he told my Husband to apply at is the company he is still working for today. 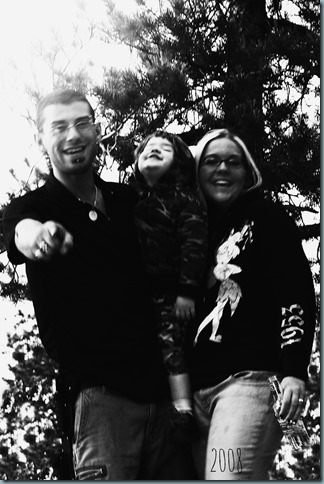 (Above: At 2 1/2 years old, she’s our little campin’ princess. She’s beautiful, brilliant, a social butterfly, funny as hell, sweet as pie and the light of our lives.)

The beginning of 2009 brought with it a whole new outlook on life for the both of us. The past year was the hardest thing we had ever endured, but we made it through. We worked through our problems (which made us stronger than ever) and ever since, we are a force to be reckoned with. My Husband got his first degree in HVAC, graduating top of his class with a 4.0 GPA and perfect attendance. I was so proud of him! 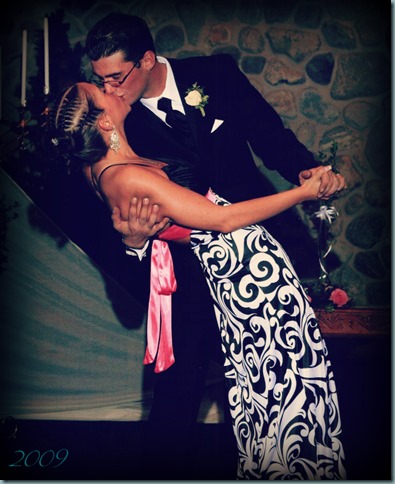 (Above: Hubby was an Usher in his Brother’s marriage to the [comment has been censored].)

2010 brought with it: my Husband going BACK to school for ANOTHER degree, this time in Mechanics…he’s an overachiever. ;) We also were in a past friend’s wedding, we went on vacation to my birth state (Illinois) to see my extended family (the last time I saw my Grandma before she passed away the following year), and visited my Mom while she was residing in Wisconsin. We said goodbye to a very dear friend of mine as she moved away to Ohio (miss you L) but not before we conceived our second child. L’s goodbye party brought with it some booze and time away from MHG. It’s no surprise that Cindy decided to make an appearance. ;) 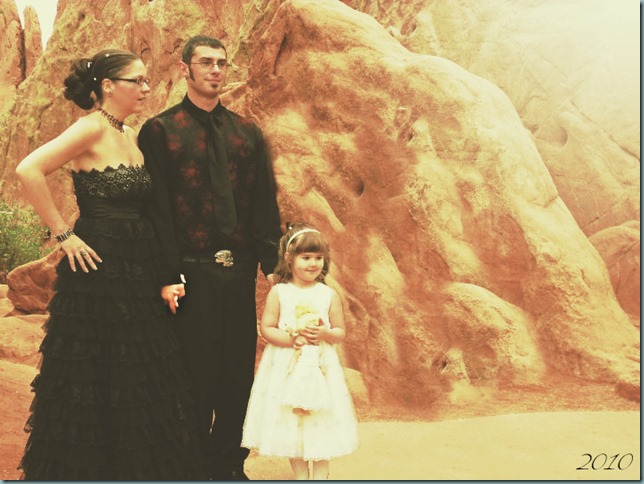 2011 was a very bittersweet year for us 3. I was 3 months pregnant (going on 4) and my Husband had an opportunity to make a lot of $ going back to work for the company he started with in 2008. The catch was, it was a project in Virginia, and only he was going. We talked it over and with a baby on the way, we decided we really needed the money. He took a leave of absence from working on his Mechanics degree and flew to Virginia on February 6, 2011, leaving me to raise our 5 year old without him present. He got back home on May 1, 2011, picked right back up where he left off in school and delivered our baby in an at-home water-birth on June 25, 2011. (You can read about that here: http://boho-hobos.blogspot.com/2013/06/happy-2nd-birthday-baby-girl.html ) After seeing what it was like to be without him, we thoroughly enjoyed having him home and happily wrapped up the remainder of 2011. 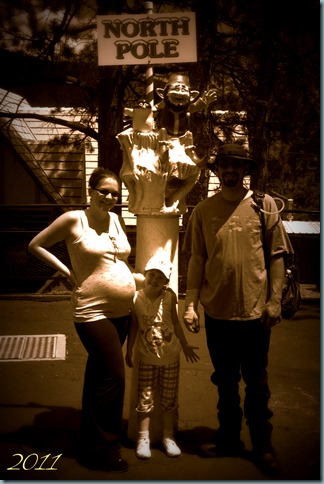 (Above: Exactly 1 week before Cindy was born. I’m pretty sure walking around at that amusement park all day triggered her early birth.) 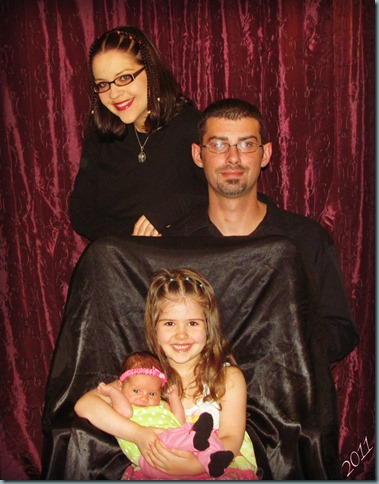 (Above: MHG is 5 1/2 years old and Cindy is exactly 1 month old. We were certain that we gave every bit of the love we had left to MHG when she was born. As it turns out, when Cindy was born, our hearts grew even bigger to give her the same. She’s tiny but mighty. She’s absolutely fearless, smart as a tack, simply stunning, and always keeps us on our toes.) 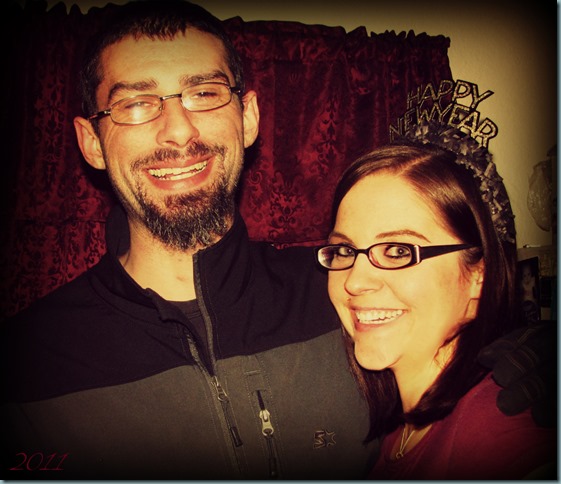 (Above: Bringing in the New Year with Jedi and Tiger!)

Last year, in March, my Husband finished his SECOND degree (Mechanics) and got ANOTHER 4.0 GPA!!! I know I’m bragging, but this is the voice of an ULTRA-PROUD wife shouting from the rooftops! GOOD JOB HONEY!!! He got a call in May to go back to work in Virginia. After being on unemployment for a year, it was a blessing! He headed back there, at the end of May, missing MHG’s graduation from Kindergarten by just a couple days. :( I started homeschooling MHG in August because she was just so incredibly advanced. The special ed teacher pulled me aside to tell me that it’s her job to test the entire school to see where everyone’s at academically. She told me they re-tested MHG twice because in Kindergarten, she was already reading at a 5th grade level and a few grades advanced in all the other subjects. I’m sure she saw it as giving me props, but I saw it as “Soooo what ARE you guys teaching her? Everything she’s advanced in WE  taught her…” Hubby and I talked it over and realized that she was going to end up not spreading her wings because she was going to constantly be slowed down or bored to always be kept at the level of her classmates.

That year came and went really quick. In September, we decided we wanted to buy an RV so we could go to Virginia with him. I spent the remaining 6 months of 2012 packing, downsizing, selling, getting rid of, or giving away 100% of our belongings. (See my very first few blog posts for that story.) 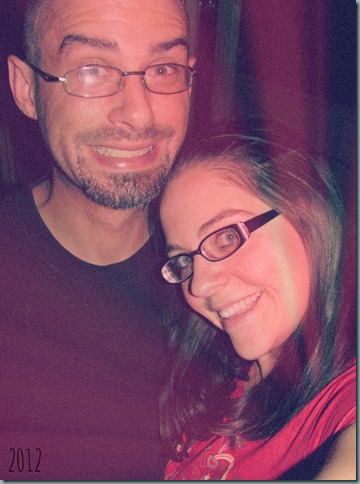 (Above: Enjoying our visit with Ahdoo over the summer.) 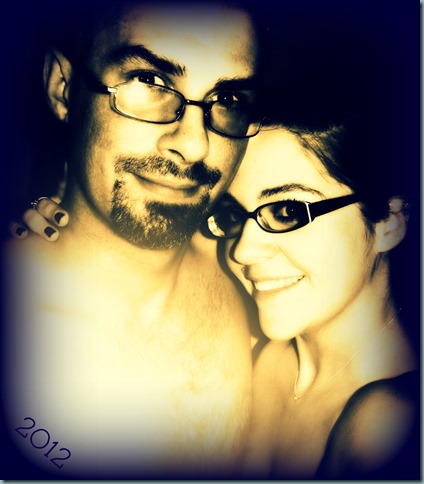 (Above: Our visit together during the fall.) 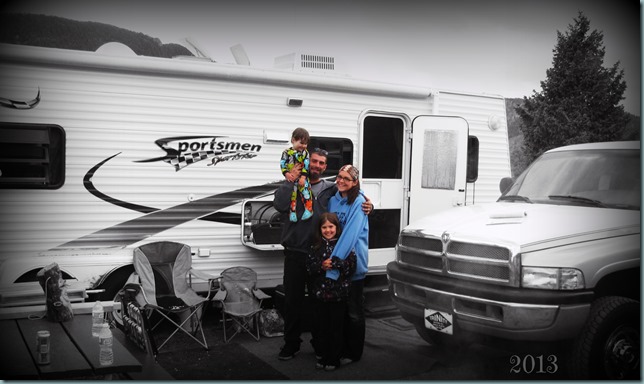 Today we celebrate 9 years of fun, challenges, lessons, growth, wisdom, hope and love. I love you with every single fiber of my being and I thank Goddess every day that our lives were meant to intertwine. You are my other half, and at times, even the better one. I am so glad we made our lives as one, had two beautiful girls together, and hung on through the sad and scary moments that life threw at us. You are a loving father, amazing Husband, hard-working provider, and you excel at anything you put your mind to. Any woman would be lucky to be married to you, so I’m glad you picked me. I love you, forever.

Here’s to another 70 fabulous years!!! Happy Anniversary honey!  I love you. 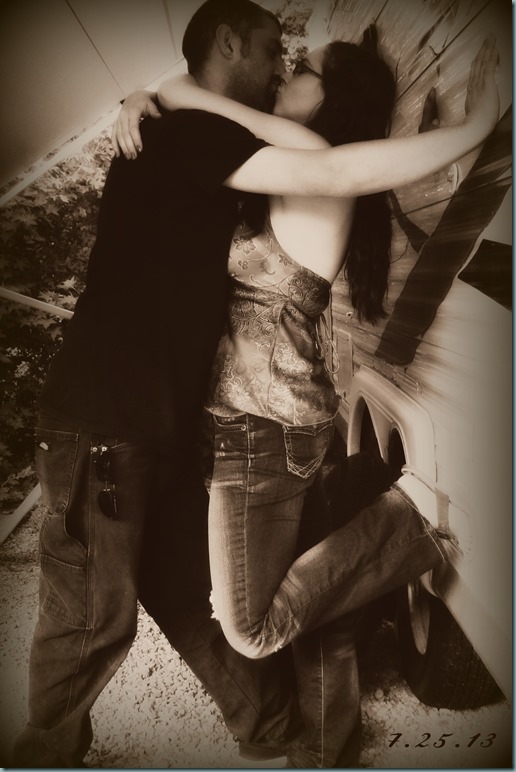