Our eldest has an incredible history of sleepwalking. We have been known to find her in strange places of our last home, eyes open, but not present. I can recognize instantly when this little girl is actually asleep. She will have conversations with us in the middle of the night at times as well. The problem is, 90% of the time, it is complete gibberish. Occasionally, there is the 10% time that she will still be asleep, eyes open, somewhere strange…or maybe just in bed, and I’ll actually be able to get 1 word responses from her that actually DO make sense. Anyways…here’s what happened:
Monday, July 1, 2013 @ 3am, Ahdoo was up trying to find his way to the bathroom in the dark. He heard MHG yell something along the lines of “No Mommy! Wait!” and then THUD! I had been asleep, but upon hearing the thud (I knew exactly what it was even though it’s never happened before, and she wasn’t crying), I sat straight up in bed, still half asleep, and apparently yelled “Who, what, when, why, where, how?!” and bulldozed him out of the hallway for not getting to her fast enough, lol.
I think she sleep crawled backwards down what she thought was the side of her bed. The other problem is that she sleeps like a maniac, all over the place. I think in her head, she was at the head of her bed, and had a bit of a ways to back down to get to the end/side where she climbs down. In reality, she was already at the end of her bed and disoriented, and when she went to scooch down her bed, she just fell completely off the end. It was a miracle really. She wasn’t crying, or whining, or making a peep, so I was terrified to turn the lights on…I thought she was knocked unconscious…or worse.
We turned on the lights and found her sitting up, at the end of the bed…on the floor. We have this gigantic Star Wars AT-AT toy that literally broke her fall. It’s completely moveable, but stiff. She landed on his head, causing his front arms to lie down at an angle, so she had no choice but to stay in the upright position when she fell. Had that toy NOT been there, she would’ve fallen and knocked her head on our catbox holder…which most likely wouldn’t have been pretty. This is the only time in my life that I’ll thank the Star Wars industry for producing something of use to society, lol!
We picked her up, checked her over and Ahdoo put her back in bed…and tucked her in super tight. She had a scratched/bruised up right shoulder, and a big bruise growing on her right calf at the front…other than that, no concussion, bleeding or broken bones. Keep in mind, that she was not awake throught ANY of that. I was trying to talk to her, and she was giving me 1 word answers. “Are you ok? Does anything hurt? What happened?” All I got was a “Yes.” “Yes, what?!” Nothing. I knew she wasn’t awake and so I gave up.
When Ahdoo and I crawled back into bed, I lost it and just started bawling. I couldn’t bear the thought of something terrible happening to either of my girls. I told him that ASAP, we were going to fix that bed and make it safe for both of them. They’re still babies. I may think they’re old enough to handle something, and then I get a slap in the face from reality.
My job as a parent is to protect them, when it’s necessary, and give them a safe living environment...among other things. As a parent, you remove unsafe objects from children’s reach, put up household chemicals and medicines, put baby gates up on staircases to prevent falls, put side rails on beds to prevent falls, remove sharp objects, pad corners at eye level, etc. I did/do/have done all of that and STILL my kid manages to fall out of bed. I feel like a turd.
The next morning, she didn’t remember a thing! All she wondered was why her leg hurt, but had no memory of the whole ordeal. Jeez Louise. Later that day, when Ahdoo got off work, He and I sat outside scheming. As a typical man, He figured it would happen once and she wouldn’t ever do it again. I explained that in the land of Sleep Walking, that is sometimes a thing you NEVER grow out of. He agreed but said He didn’t want to cage her in.
That’s it! We cage her in, in a COOL cage, lol! I said “We should build her a TREEHOUSE!” So, there it is. The perfect solution. He decided it was a great idea, but boarding off walls was too heavy for the RV, and air circulation would not be good. He was going to build it out of Lattice, and I should buy a ton of fake Ivy to weave in and out of it! Yes!!! We pitched our idea to her and she would’ve jumped through the ceiling in excitement if she was taller.
Tuesday, July 9th, the construction began…and He made it look really easy. I’m pretty sure the pictures speak for themselves, so I’ll stop babbling. 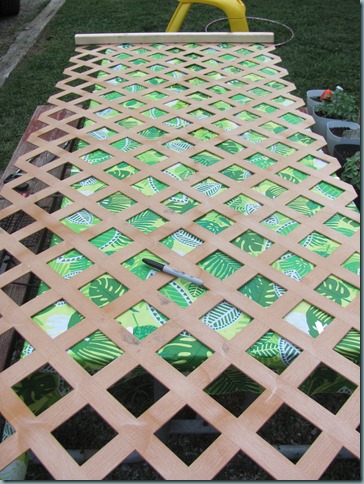 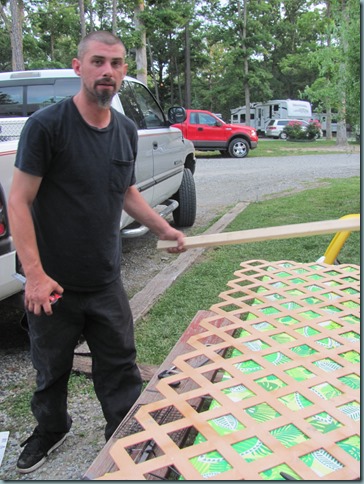 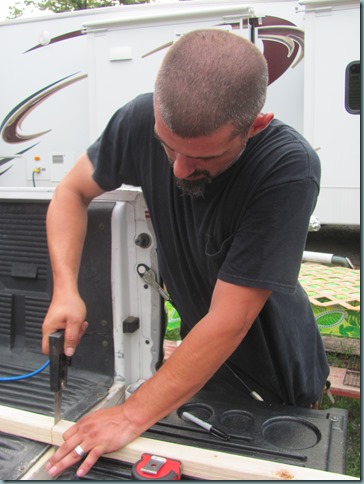 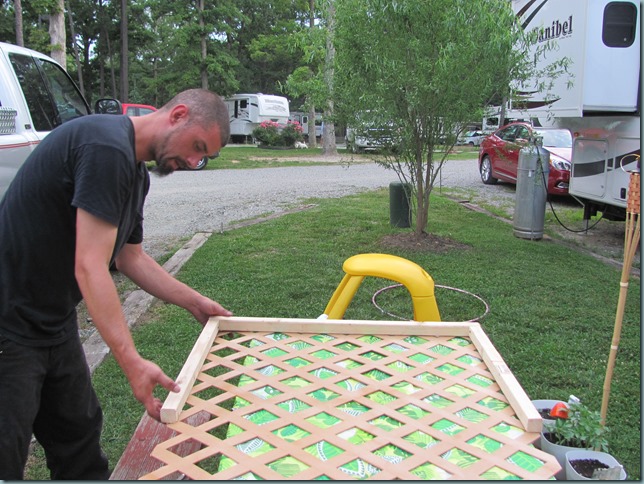 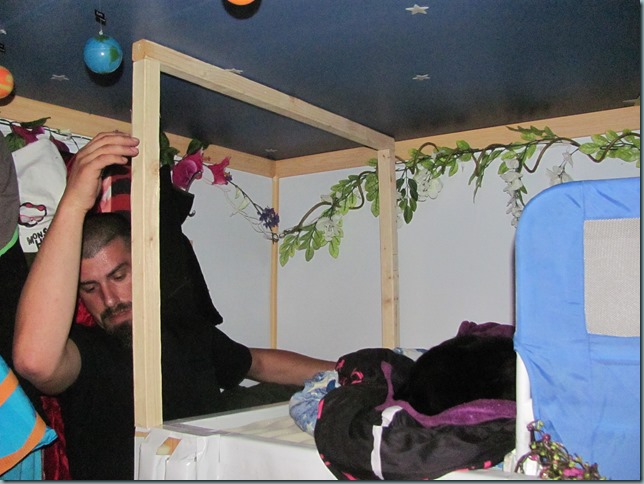 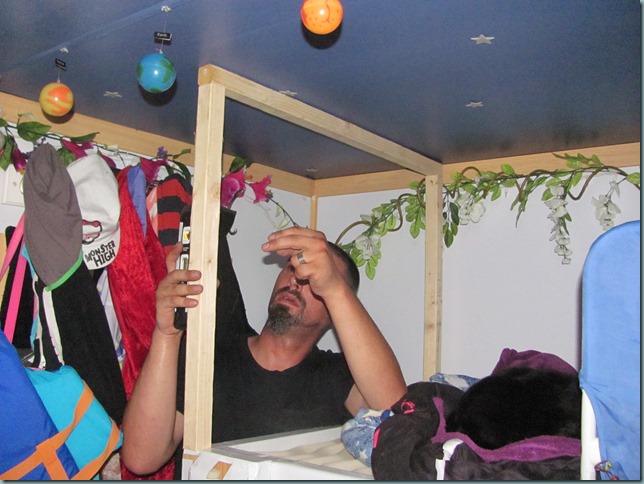 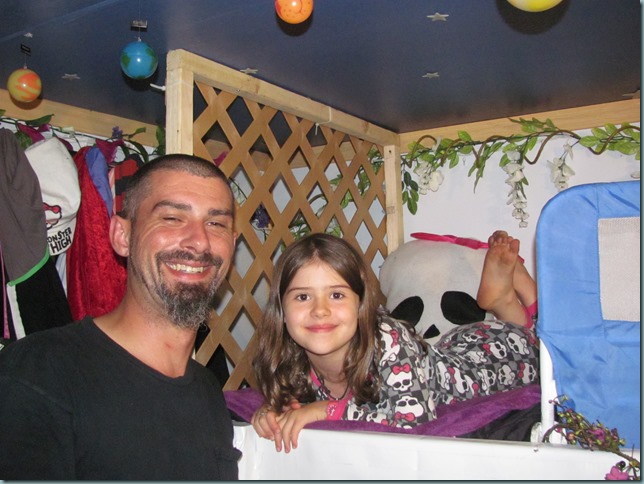 He did screw the top of the frame into the ceiling joists, and L-bracketed the uprights to the bed (2 L-brackets per upright). Currently, the lattice is just zip-tied to the frame, but that’s because he is going to frame off the lattice where it attaches to the bed at the end of Cindy’s bed. Then, he’ll screw the lattice to the entire frame and the bed. Friday, we’re buying the rest of the lattice and the 2”x2”x8’ boards needed to frame off the rest of the bed. We are going to get rid of their crappy side rails, and replace them with more lattice for a nice uniform appearance. Everyone loves it!
Posted by The Boho Hobos at 7:57 AM