Ostara turned out to be a pretty productive day for me. I was able to do the decorations in our bedroom. The curtains I sewed last night were the first to go up...﻿after those 2 were hung, I put up the Christmas lights. I should've done that first, but it was fine. Luckily, there's an outlet right there to plug them in. 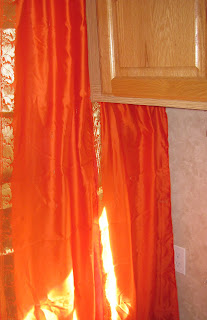 After the orange curtains, to the left of our over head cabinets, were hung, and the lights were all up, I hung the one eggplant curtain. The eggplant curtain is actually sideways on the wall. I was really opposed to altering it in any way, so I'm glad it worked out this way instead. 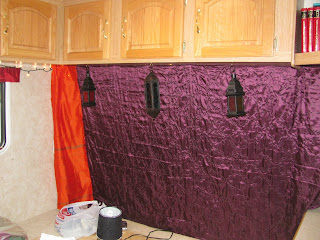 Just for fun, I had leftover red sari material last night that I hemmed for no reason. As it turns out, I was able to utilize it as a valance of sorts. Yay.

Once the "valance" went up, I finally put up my beaded trim that I've been holding on to for over a month now. The suspense was killing me, but patience persevered, and I think it turned out awesome! 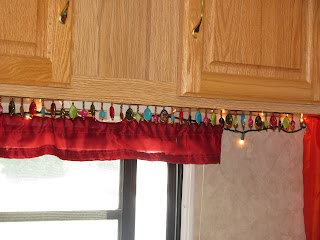 I just think this trim is incredibly dreamy! It adds a nice subtle boho touch to the bedroom decor. 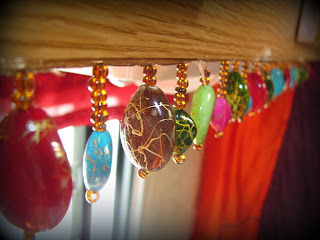 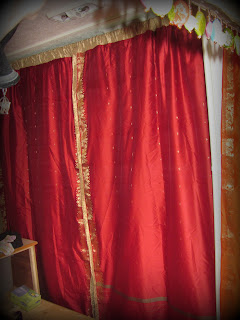 Here's the gold side (looking at our bedroom from the hallway): 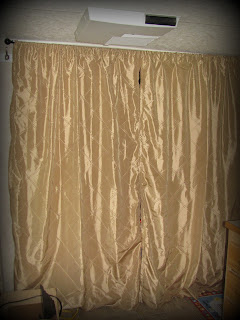 Just for fun, here they are tied open with the red backs purposely showing...normally, even if they're tied open, I'll probably not show the red. Who knows though? Maybe I will?

As you can see, I also hung another orange sari after the eggplant curtain, I actually hung one more to the right of that orange one as well. Apparently, I forgot to photograph it. 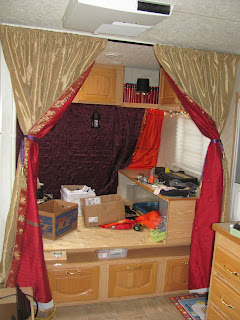 ﻿When I was done screwing around with the red/gold curtains, I hung my window tapestry. I'm not sold on it staying over that window. I just couldn't think of a better place to put it. I still want to make real curtains (insulating/room-darkening) for that window...especially because it is right over our heads. However, in the meantime, it will do just fine. 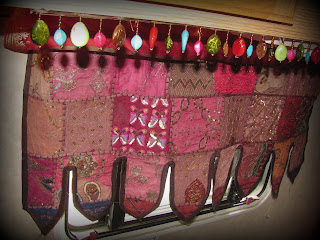 I hung my sheer purple Runic tapestry as our headboard. It's pretty. I'm not sure it'll stay there either...I might need to add more material behind it for more insulation. For now though, it'll do.

After that was done, my Mother-in-law came out and told me my Moroccan lamps were missing something. I found the gold chain they originally hung from in my apartment bedroom and draped them from one to the next and back (two times). The gold chain against the eggplant curtain was quite striking and seemed to offer the finishing touch. I forgot to photograph that too, sorry. 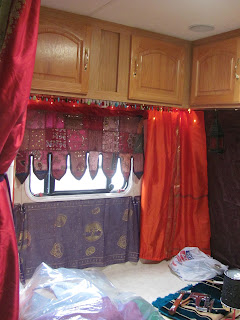 After I was finished in our bedroom, I moved on to the girls' room. I disassembled the second bunk bed and got it out of the rv. I saved the parts though. We're going to make it fancier. It is in dire need of some good sanding and staining. I wanna go ebony for the stain. DH is also going to round edges, I think, and build on permanent side rails.

Last but not least, I put up one long shelf. It's the "Homeschooling" shelf, because it's the one I put all of my eldest daughter's bins on. Her bins are full of supplies that I really prefer neither child touch without permission. Outta sight, outta mind...usually. It should do nicely. Of course, I put it up, just to see where the holes should go. This way, I can take it down, paint the walls, and put it right back up without screwing up my freshly painted walls. Yay.

My goal is to commence the painting this weekend, but we'll see. I hear it's supposed to start snowing Saturday, and I really don't wanna deal with that. I have to tape walls, sand, wet-wipe down the wall, ﻿prime, THEN, I can paint. And, all of that, ONLY, after I have tried the aforementioned process on just one panel. My darling husband thinks I'm gonna mess up the walls, so he wants me to do a test run first on just the one. It's not a bad idea, after all, he is a wise, wise man.

On that note, I'm gonna go to bed. It was a long day and I am exhausted. Goodnight everybody!

P.S. Our bedroom looks REALLY cool at night. The Christmas lights behind the curtains give off a really subtle, ambient glow. That was exactly what I was aiming to achieve. I'm thrilled!
Posted by The Boho Hobos at 10:49 PM